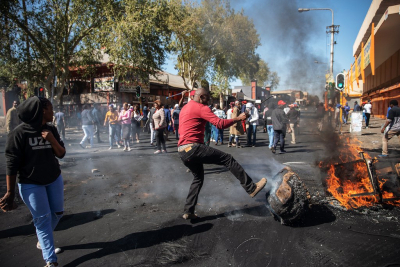 Defence Minister Nosiviwe Mapisa-Nqakula said that the government will consider instituting a state of emergency if it deems it necessary to quell the violent protests and looting currently being seen in Gauteng and KZN.

In a media briefing on Tuesday morning (13 July), Mapisa-Nqakula said that the decision to declare a state of emergency rests with president Cyril Ramaphosa, but that the department of defence does not think the country has reached that point yet.

She further cautioned that the introduction of a state of emergency came with serious consequences – including the loss of people’s liberties as the South African National Defence Force takes over to restore order.

The Constitution allows the president to declare a state of emergency with immediate effect, however, it can only be implemented for 21 days. Any further extension must be voted on by parliament.

It would lead to the suspension of certain laws and rights, and increased powers given to authorities in government.

Police minister Bheki Cele says that the South African Police Service (SAPS) and other government agencies are monitoring social media for people who are inciting violence as part of the country’s ongoing riots and looting.

Cele said that the government was also in contact with social media companies to help track and trace individuals.

"If these acts of violence continue unabated, we run the risk of running out of basic foodstuffs and that would be disastrous for the country," Cele said.

The police minister confirmed that more than 750 arrests have now been made in response to the violence, with 304 people arrested KZN and 453 arrested in Gauteng since the looting began.

However, he raised concerns around the loss of life caused by the violence and warned that the mass gatherings could lead to the further spread of Covid-19 and further overwhelm hospitals.

"The greatest risk for the mass protests that have ensued in parts of the country is the rapid spread of the pandemic, causing a rapid rise in infections and affecting our ability as government and a health system to respond to this," he said.

"No amount of unhappiness or personal circumstances from our people give the right to anyone to loot, vandalise and do as they please and break the law.

"We cannot allow anyone to make a mockery of our democratic state and we have instructed the law enforcement agencies to double their efforts to stop the violence and to increase deployment on the ground."

Twitter
More in this category: « Livestream:Security cluster briefing on SANDF deployment. 200 shopping malls looted, and an estimated R2 billion lost. »
back to top