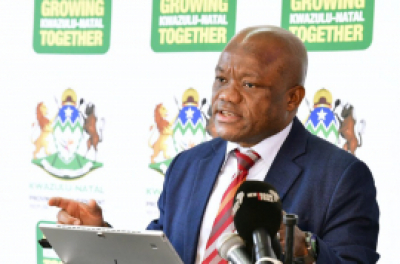 Premier Sihle Zikalala has assured citizens that government is working hard to stop these riots.

During a media briefing on Tuesday, the Premier said a multi-pronged response plan to deal with the protests has been developed and will be implemented by law enforcement agencies.

"The deployment of the South African National Defence Force (SANDF) came as a result of engagements within the security cluster, having [seen… the] events in various wards," the Premier said.

The SANDF will work in support of the South African Police Service (SAPS).

"Their deployment will be supported by the intelligence coordinating committee, which will include intelligence, defence intelligence and State security. These forces will be part of our multi-disciplinary law enforcement strategy to quell the unrest and attempts to render the province ungovernable.

"This will enable our law enforcement authorities to counter these sporadic yet well-orchestrated violent protests,"Zikalala said.

This has been done to arrest protests and damage to property, as well as to stop the looting that has taken place recently.

The SAPS, together with law-enforcement authorities, will be manning all key economic centres, highways and strategic areas that lead to hospitals, the port of Durban and other national key points.

"As the provincial government, we have directed that all municipalities must operationalise Operation Sukuma Sakhe to identify risks and threats in their area and report these before they even happen.

"We have also activated coordination at district level, where our mayors and councillors will work with all stakeholders and assist law enforcement to attend to threats and protests that are engulfing our areas.

"We are also ensuring that all MECs are on the ground, working with their respective mayors, stakeholders and districts to identify areas that might have threats and ensure that they are addressed," the Premier said.

Zikalala said according to the latest fatalities statistics, 26 people died during a stamped as protestors ran riot. Law enforcement agencies have arrested 187 suspects.

The destruction to private and public infrastructure in the province has been estimated at about R1 billion.

"The violent protests have had a negative impact on the economy of our province. This is largely because the protests have targeted key economic centres and infrastructure, including shopping malls, trucks and major arteries such as routes on the N2 and N3.

"More significantly, this violence has crippled our small and emerging businesses. Hawkers cannot sell because cities are shut down, "Zikalala said.

With the taxi industry not operating, it is losing money and risks losing vehicles due to being unable to meet their commitment to the banks.

"The sectors that have been severely impacted include freight and retail. However, other sectors were not spared, as many companies had to suspend their operations due to the inability to transport materials and stock.

"These incidents have the potential to dampen investor confidence and derail our economic recovery efforts. The social cost of the damage might come in the form of increased unemployment and increased poverty in years to come," the Premier said.

The blockading of key infrastructure routes has made mobility difficult and this has been worsened by the unavailability of public transport.

"As a result of this, some community health centres and clinics have been operating on skeletal staff, with many nurses, doctors, allied workers and general staff unable to report for work.

"Some clinics have had to be closed because of the unrest. Many hospitals with trauma cases are unable to undergo important [procedures] such as x-rays and others.

"It is extremely concerning that in some cases, the protestors stop vehicles from delivering much needed oxygen intended for the use of patients battling COVID-19 and other ailments, "the Premier said.

The protests have also put a stop to the COVID-19 vaccination rollout programme.

“The current situation has a huge potential to undermine our advances in battling the Delta variant of COVID-19, which is increasing at an uncontrollable rate across the province,” the Premier said.

Most municipalities within the province have also been adversely affected.

"The delivery of services has been halted due to the continuing unrest. Maintenance and infrastructure repair teams are unable to get to areas that require such service.

"The sporadic outbreak of violence has also hindered the delivery of basic services such as waste removal, and provision of water through water tankers in water scarce communities," the Premier said.

Zikalala has called for the return of peace, calm and stability in the province and the country.

"We are appealing to the collective conscious of all those who are trying to render our province ungovernable to desist from what they are doing in order to avert the unnecessary loss of life, "he said.