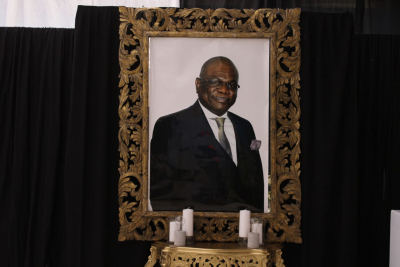 The late City of Johannesburg mayor, Geoff Makhubo was laid to rest at the Westpark Cemetery on July 14.

ANC treasurer-general Paul Mashatile has paid tribute to late Johannesburg mayor Geoff Makhubo, describing him as a genuine friend, patriot and true comrade to the end.

Speaking at the funeral service for the mayor held in Soweto on Wednesday, Mashatile said the ANC had lost one of its finest leaders who was hard working and always dependable.

"He was there in the student struggle, he was there in the youth struggles [and] he rose through the ranks of our liberation movement up to a point where he led the ANC in Johannesburg. He placed a high premium on the unity of the ANC and the alliance," Mashatile said.

Mashatile said the ANC was deeply touched by the mayor’s sudden death, saying he was a "rare jewel" and had a "razor-sharp mind".

"We were shaken to the core, for he left us at a time when the people of South Africa and his movement, the ANC, were still expecting much of him. However, comrades, it is not our part to mourn.

He concluded, "To his friends, family and comrades, we are heartbroken by this monumental loss and departure of our leader, we have to mourn his untimely departure but we must celebrate his breathtaking life."

During the funeral, his friend and colleague MEC Sizakele Nkosi-Malobane said that he was a true servant of the people and those who were privileged to know him can attest to his commitment to improving the lives of others.

He became the Mayor of the country’s biggest metro in December 2019. He was also the chairperson of the ANC Johannesburg region.

Makhubo leaves behind his wife and two daughters.

Twitter
More in this category: « Electoral Commission launches online voter registration. Ramaphosa assures political parties that government is intensifying its efforts to stem violence and looting. »
back to top