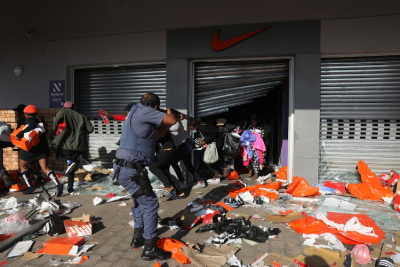 The death toll from violent protests around Gauteng (GP) and KwaZulu-Natal (KZN) has risen to 117,with the deployment of thousands of soldiers starting to take effect.

This was announced on Thursday by Acting Minister in Presidency Khumbudzo Ntshavheni.

Ntshavheni said that Gauteng was relatively calm and was steadily returning to normality.

"We are pleased that the Gauteng province has been relatively calm and that there has been fewer reports of incidences over night and this far," said Ntshavheni.

"We have arrested 139 additional people, which makes a cumulative total arrest in GP to 725 to date the Saps has received reports of 26 deaths."

"The situation in KZN remains volatile but much improved, it is moving towards stability."

She said that there had been 39 incidences reported in KZN overnight and an additional 392 arrests were made, which makes cumulative number to 1,347.

Ntshavheni also urged members of the community guarding against looting in the absence of law enforcement officials not to take the law into their own hands.

Meanwhile Ntshavheni refrained from entering the fray regarding reports that former president Jacob Zuma’s ex-bodyguard, Thulani Dlomo, is one of the prime suspects that allegedly encouraged the looting and violence the country has witnessed over the past few days.

According to News24, it is alleged that Dlomo, who is the former head of a State Security Agency (SSA) special operations unit, is one of the 12 people who they believe to be the instigators of the public violence and are being investigated by the agency.

Twitter
More in this category: « WHO sends Covid-19 warning to South Africa after riots. BUSA calls on government to declare a 24-hour curfew in KZN and Gauteng. »
back to top