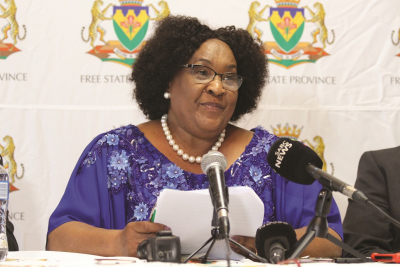 "The peace loving people of the Free State province spoke in unison in condemnation of the violence and pledged to prevent any violence in our beloved province," the Free State Provincial Government said on Thursday.

The provincial government said many organisations and ordinary people have strongly condemned the violence and rightfully warned that lawlessness will not be allowed in the province.

"Our people realise that the violence is self-defeating and will only bring about long-term suffering for the majority of our people. Jobs, which we desperately need at this moment, will sadly be lost as a result of the events of the past few days.

"The right to a peaceful protest remains a constitutional right for all South Africans. This is a right, which was won through many years of difficulty and strife. Many of our people paid the ultimate price for the realisation of this sacrosanct right.

"We therefore wish to plead with all our people to exercise this right in a manner that promotes peace and stability in our communities," the provincial government said.

During Wednesday’s Executive Council meeting, the provincial government received a number of reports, which included a report from law enforcement agencies in the province.

The report by the law enforcement agencies was necessitated by the need to have a comprehensive understanding regarding peace and stability in the province.

This as parts of Gauteng and KwaZulu-Natal experienced violence that has resulted in the deaths of civilians, the looting of public and private property, destruction of infrastructure, as well as the suspension of essential services this week.

"We commend the continued vigilance demonstrated by our law enforcement agencies and urge all our people to continue to work closely with them.

"Furthermore, we wish to commend the people of the province for the continued adherence to the Adjusted Alert Level 4 regulations, particularly the observation of the non-pharmaceutical interventions," the provincial government said.

Meanwhile days after violent protests engulfed parts of the country, the situation in Gauteng has stabilised with clean-up operations to vandalised facilities having commenced.

"We are pleased with the reports that Gauteng is largely calm with fewer incidences overnight and thus far, only six incidences were reported. This has been largely due to increased deployment of the South African National Defence Force (SANDF), South African Police Service (SAPS) and the Metro Police in areas that have been identified as potential hotspots," acting Minister in the Presidency, Khumbudzo Ntshavheni, said on Thursday.

Providing an update on the ongoing violent protests in some parts of South Africa, the Minister said the situation in KwaZulu-Natal remains volatile but moving towards stability.

Government has expressed concern at the economic impact of the violence, looting and destruction of infrastructure that has taken place.