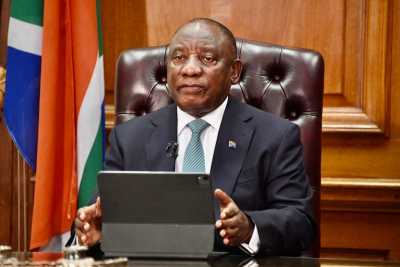 President Cyril Ramaphosa will address the nation on Friday evening (16 July) about the violent protests and looting which took place in Gauteng and KwaZulu Natal this week.

In a media briefing on Friday afternoon, acting minister in the presidency Khumbudzo Ntshavheni said that the briefing will take place at 20h30.

In the seven days of the unrest, 212 people lost their lives. Beyond this, billions of rands of damage were inflicted on the KZN economy when businesses and infrastructure were looted and razed in fires, the president said.

A total of 180 people were killed in KwaZulu-Natal and 32 in Gauteng and a total of 1,692 people were arrested in connection with looting and violence.

"People are now going to go forward having lost jobs and the economic damage that has been done," he said.

"The country’s image as an economic destination had been severely dented, not just to local investors but also to external investors. “We’ve really been taken backwards on our path to economic recovery."

Ramaphosa said that the government could also have done better in managing its response to the protests.

"Primary in the minds of the Minister of Police and commanders was to save lives, to make sure that we did not get into a situation which could have resulted in more mayhem," he said.

"We regret that the situation has resulted in this. This is not what we want to see in our country."

Ramaphosa made an oversight visit to eThekwini, in KwaZulu-Natal,was accompanied by Police Minister Bheki Cele, his State Security and Defence counterparts Ayanda Dlodlo and Nosiziwe Mapisa-Nqakula, as well as KZN Premier Sihle Zikalala and members of his executive.

Twitter
More in this category: « Minister Didiza meets with farmers on food security. Gauteng officially reaches peak of third wave of Covid-19. »
back to top