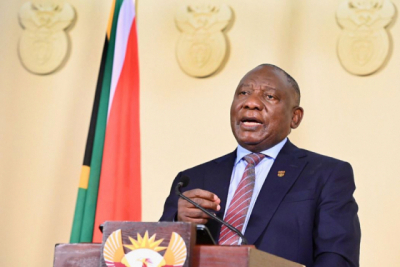 President Cyril Ramaphosa says that the last week of violence was a result of an attempted insurrection.

In an address this evening, the president said that the events were a deliberate and coordinated attack on South Africa’s constitutional democracy.

"These actions are intended to cripple the economy, cause social instability and severely weaken – or even dislodge – the democratic state. Using the pretext of a political grievance, those behind these acts have sought to provoke a popular insurrection," he said.

Ramaphosa said that the instigators of the violence sought to exploit the social and economic conditions under which many South Africans live – conditions that have worsened since the onset of the coronavirus pandemic – and to provoke citizens and criminals to engage in opportunistic acts of looting.

"The ensuing chaos is used as a smokescreen to carry out economic sabotage through targeted attacks on trucks, factories, warehouses and other infrastructure necessary for the functioning of our economy and the provision of services to our people."

Yet, despite the widespread destruction, this attempted insurrection has failed to gain popular support, Ramaphosa said, adding that it also failed due to interventions by security forces, and because South Africans stood up in defence of the country’s hard-won democracy.

Since the outbreak of the violence, at least 212 people have lost their lives. Of these, 180 have been in KwaZulu-Natal, and 32 in Gauteng, Ramaphosa said.

He added that the South African Police Service is investigating 131 cases of murder and has opened inquest dockets in respect of 81 deaths.

"While we commend the brave actions of our security forces on the ground, we must admit that we did not have the capabilities and plans in place to respond swiftly and decisively, "he said.

"Our police were faced with a difficult situation and exercised commendable restraint to prevent any loss of life or further escalation. However, once additional security personnel were deployed, they were able to quickly restore calm to most areas that were affected."

Once the crisis has passed, the government will undertake a thorough and critical review of its preparedness and response, Ramaphosa said. However, in the short term, authorities will:

Ramaphosa said he has increased the numbers of law enforcement and security personnel on the ground in Gauteng and KwaZulu-Natal.

"The N3 freeway between eThekwini and Gauteng has been re-opened and security forces are in place to keep vital supply routes open," he said.

"Regulations have been issued in terms of the Competition Act to enable firms involved in the supply of essential goods to share information about the availability and demand for certain goods. This is to help prevent shortages of essential goods and promote the equitable distribution of scarce essential goods across the country."

While Ramaphosa acknowledged the call for a state of emergency, he said that government would only declare one as last resort.

"We will extinguish the fires that are raging, and stamp out every last ember. We will identify and act against those who lit the flame, and those who spread it and those still attempting to do so."

"We will find those who instigated this violence. They will be held accountable for their deeds. We will not allow anyone to destabilise our country and get away with it," he said.

He added that the damage that has been done to vital economic infrastructure will take time to repair.

"It has destroyed businesses and will undoubtedly lead to further job losses. Ultimately, it will deepen poverty and cause even greater hardship for millions of South Africans."

However, the president said that the government would offer support to households and help businesses to restock and rebuild.

"Provincial Departments of Social Development and SASSA will use their remaining budget in the Social Relief of Distress programme to provide support in the form of food parcels, cash and food vouchers," he said.