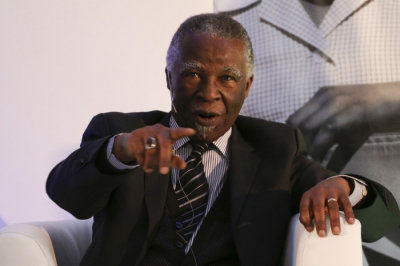 The Thabo Mbeki Foundation (TMF) has called on South Africans to be vigilant and not be misled by instigators exploiting the poor conditions of others.

The Foundation on Friday night said it had followed the public unrest that gripped parts of Kwa-Zulu and Gauteng this week with deep concern, saying the destruction of property and mass looting cannot be accepted as incidental because it was preceded by "open threats of civil war and unrest".

The hallmarks of 'state capture' – the deliberate and systematic denuding of state capacity that we have witnessed at the South African Revenue Service, state-owned enterprises, the weakening of all arms of law enforcement (including intelligence agencies and the National Prosecuting Authority).

"The economic sabotage, wanton destruction of property and infrastructure we have witnessed cannot be accepted as incidental. We recall that the current situation was foreshadowed by open threats of civil war and unrest," the foundation said in a statement.

The TMF said it recognised South Africa’s democratic state finds itself in a precarious position, and that for many citizens "the democratic dispensation has not delivered on its promise of better socio-economic conditions".

It said a lot more urgent work remained to be done to address the country’s challenges.

The pressing socio-economic conditions of our people and the recent arrest of former president Jacob Zuma have served as a perfect set to mount an offensive against the state and the constitutional democratic edifice on which it is built.

"The unprecedented avalanche of misinformation is well orchestrated to ensure that when the embers die down, this nation will be confronted with a population that has lost all hope and is in despair. In many ways, pessimism will strike and the human dignity that we have all strived for will become but a fleeting dream."

The foundation called for calm and unity, saying the focus should be on uplifting all citizens for greater national and social cohesion.

It also called on "all sectors of our society to refuse to be misled and fall victim to masters of the dark arts designed to exploit our challenges as a people".

The TMF commended South Africans who have stood in solidarity with those affected by the violence and unrest. It acknowledged government and law enforcement agencies for their efforts to restore law and order across the country.

The foundation called for calm and for the violence to end.

Since the start of the unrest, at least 212 people have lost their lives. Of these, 180 have been in KZN, and 32 in Gauteng. Police are investigating 131 cases of murder and have opened inquest dockets in respect of 81 deaths.

Twitter
More in this category: « Government plans to develop a comprehensive support package for businesses. Lamola gazetted new court directions to help expedite prosecution of criminal and priority cases. »
back to top