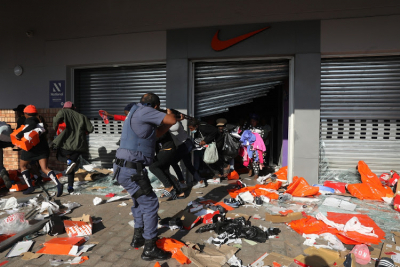 Government is entering a 'clean-up' phase of its response to this past week’s violent riots and looting, which includes taking steps to stop unrest from spilling over to other parts of the country.

President Cyril Ramaphosa on Friday night characterised the week-long riots as a failed insurrection, saying that certain groups were behind the unrest.

Security officials had reportedly identified 12 people as 'instigators' of the riots, with one brought into custody so far.

While the violence was largely contained and limited to KwaZulu-Natal and Gauteng, high-ranking security officials told the City Press that there is a risk that other provinces may follow suit, and the government is now moving to gather intelligence and fortify areas believed to be the instigators’ next targets.

Police and soldier visibility is also expected to be ramped up at hospitals and vaccination sites, to try and get the country’s Covid-19 vaccination programme back on track – while the government is reportedly planning comprehensive relief packages for businesses affected by the riots, aimed specifically at those that are uninsured.

With 25,000 SANDF forces already deployed, this may see soldiers positioned in areas for longer – possibly two to three months – with a concerted effort within the ANC itself to root out the individuals who fanned the flames of violence, or sat back and did nothing to stop them.

In his Friday address, Ramaphosa admitted that the government had failed to meet the riots and violence with an adequate response, and intelligence had failed them on the ground.

"We must acknowledge that we were poorly prepared for an orchestrated campaign of public violence, destruction, and sabotage of this nature," he said.

"While we commend the brave actions of our security forces on the ground, we must admit we did not have the capabilities and plans in place as this happened to respond swiftly and decisively," Ramaphosa said.

He said that the police were faced with a difficult situation and exercised commendable restraint to prevent any loss of life or further escalation.

The security cluster has since turned to finger pointing on the events of the past week, pointing to capacity challenges, internal divisions within the ANC, and the alleged insurrectionists being privy to sensitive security information within government as causes for the intelligence failure.

Ramaphosa said that those responsible for the attempted insurrection would be brought to book.

"We will identify and act against those who lit the flame, and those who spread it and those still attempting to do so.

"We will find those who instigated this violence. They will be held accountable for their deeds. We will not allow anyone to destabilise our country and get away with it," he said.