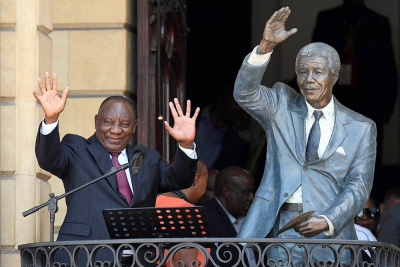 Leaders of the ANC’s alliance partners, Cosatu president Zingiswa Losi and SACP general secretary Blade Nzimande, are expected to deliver messages of support during the memorial lecture. There will also be a panel discussion on Mandela’s legacy prior to Ramaphosa’s address.

The event is expected to begin at 6pm and will be live-streamed on the ANC’s social media platforms.

At the same time, Ramaphosa will lead the ANC’s clean-up and rebuilding programme in Soweto on Sunday morning.

This follows public violence, looting and vandalism that swept parts of Gauteng and KwaZulu-Natal this week.

“The leadership of the ANC will assess the damage caused by the recent looting and vandalism and to engage communities and various stakeholders in the rebuilding and reconstruction programme,” the ANC said in a statement on Saturday.

Ramaphosa will be at Ndofaya Mall, Jabulani Mall and Maponya Mall.

ANC national chairperson Gwede Mantashe will also lead a team of members of the party’s national executive committee on a clean-up drive in KZN.

Twitter
More in this category: « Government plans to restore order and track down instigators of the riots. Minister Cele deploys detectives to probe killings in Phoenix. »
back to top