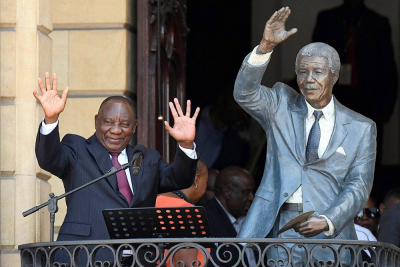 South Africa's "survival" as a constitutional democracy is under severe threat.

This is according to President Cyril Ramaphosa, speaking at an ANC event to mark former president Nelson Mandela's birthday - known as "Mandela Day" - on Sunday.

Repeating his statement from Friday that recent incidents of violent and looting was part of an "insurrection", Ramaphosa said the threat of well coordinated follow-up violence could not be discounted.

Earlier on Sunday he was in Soweto, where a number of people were doing clean-up operations following the violence which rocked KZN and Gauteng over the past week. He described the violence as "unprecedented in the history of democratic South Africa".

To date, more than 200 people are confirmed dead and more than 3,000 arrested for their role in the violence.

"It is clear now the events of the past week were a deliberate, coordinated and well-planned attack on our democracy, on our economy and our people’s livelihoods.

Faced with such events, president Mandela would remind us that despite the challenging times we find ourselves in, that we should keep our heads pointed towards the sun, and keep our feet moving forward.

"He would encourage us never to give up, or even to despair. And it's important that we should have that message from Madiba to guide us along the path of some of the challenges that we are facing.

“We owe it to the legacy of president Mandela and all our brave forebears who sacrificed so much for our freedom to remain steadfast in the face of this well-planned and coordinated attack on our nation," he said.

The two solutions, according to Ramaphosa, are strengthening the state and uniting the ANC.