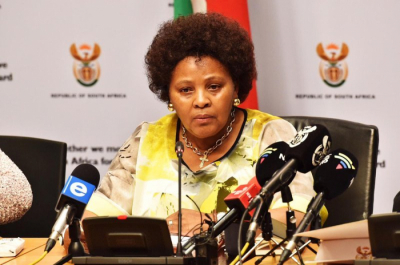 Defence Minister Nosiviwe Mapisa-Nqakula has insisted that the people behind the attacks on the malls and businesses in Gauteng and KwaZulu-Natal were counter-revolutionaries.

Mapisa-Nqakula, speaking at a parliamentary Joint Standing Committee on Defence on Sunday evening about the security situation in the country, said she did not have evidence to indicate the recent unrest in KwaZulu-Natal and Gauteng "so far talks to an insurrection or a coup".

This was in response to a question by the UDM's Bantu Holomisa, who asked exactly what situation the country was faced with. She said neither possibility - a coup or an insurrection - had come forward "with a face".

Mapisa-Nqakula said it was her view that the military was instead seeing signs of a "counter-revolution creeping in, in the form of criminality and thuggery".

However, this is in conflict with the information given out by President Cyril Ramaphosa when he addressed the nation on Friday night. He described the unrest as a "failed insurrection" attempt.

On Sunday night, Ramaphosa told the ANC event: "It is clear now the events of the past week were a deliberate, coordinated and well-planned attack on our democracy, on our economy and our people’s livelihoods. Our young democracy and our movement are going through, at the moment, a very difficult time.

Our survival as a constitutional democracy, committed to the rule of law, is under threat. Very serious attempts were - and continue to be - made to instigate unrest, insurrection against the government led by the governing party.

"We cannot say similar attacks will not be attempted in future, nor can we say those who seek to divide us will stop in their efforts."

In parliament, Mapisa-Nqakula said she was confident the ongoing military deployments will be enough to "overcome this whole thing".

They were also protecting key infrastructure.

"With the plan they are putting in, we are optimistic we will overcome this," she said.

She said the state had come under attack from counter-revolutionaries.

"The democratic state of South Africa is under threat and it is threatened by counter-revolution. If this raises its head again, we must hit very hard," said Mapisa-Nqakula.

The deployment of the SANDF served as a deterrent against the attacks and the army will continue to serve its mission where it is deployed.

Meanwhile the Joint Standing Committee on Defence has called for coherence in characterising what led to the violence, wanton looting and destruction of property over the past week, especially in KwaZulu-Natal and Gauteng.

Co-Chairpersons of the Joint Standing Committee on Defence, Cyril Xaba and Mamagase Nchabeleng, said the characterisation of the violence will assist in planning and counteracting similar future disturbances.

"The reality is that the SANDF is projecting spending about R615 million on this project and it is critical that there is clarity and coherence on what this budget is spent on now and what resources are necessary to prevent any future flare-up," Xaba said.

Despite this, the committee welcomed the information that as of Sunday, 21 525 SANDF members had been deployed as part of Operation Prosper, and the assurances that more units are on standby in other provinces that have not yet experienced protest action. These deployments are proactively positioned for when the need arises.

Operation Prosper is the joint operation between the South African Police Service (SAPS) and SANDF. The deployment period is from 12 July to 12 October 2021.