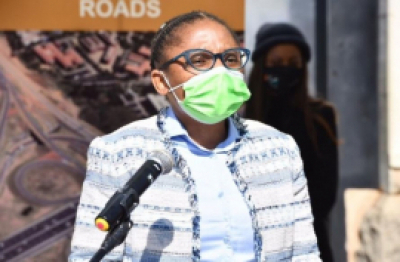 Six more individuals, alleged to be instigators involved in the recent civil unrest, have been arrested.

This was revealed on Monday by Acting Minister in Presidency Khumbudzo Ntshavheni during an update on the progress the government has made since the beginning of the unrest in KwaZulu-Natal and Gauteng.

"We have got six others of the key instigators and of those arrested three suspects have already appeared but they were remanded in police custody for bail hearings later in the week," said Ntshavheni.

"We understand that there may be an appearance the police will update us on."

She said that one of the alleged instigators who was arrested has since been granted bail. According to a NatJoint statement, details of the case will be provided at a later stage.

"Charges against them include incitement to commit public violence, further arrests are expected soon."

Ntshavheni said that the situation in both provinces has stabilised, with no new incidents of looting reported lately.

"In KZN the situation is now stable and no new incidences of looting were reported."

She said that there has been three additional deaths reported in KZN, which takes the number of the toll to 215 as a result of the protests.

Ntshavheni said the instigators would be dealt with according to provisions of the law and further arrests were expected soon.

Meanwhile Ntshavheni dismissed Defence minister Nosiviwe Mapisa-Nqakula's view as ill-informed that there was no evidence to suggest that the recent unrest was a coup or an insurrection. .

Mapisa-Nqakula told parliament on Sunday there was no evidence to suggest that the recent unrest was a coup or an insurrection. She said it was her view that the military was, instead, seeing signs of a "counterrevolution creeping in, in the form of criminality and thuggery".

This was in apparent contradiction to President Cyril Ramaphosa, who told the nation on Friday that the unrest was a failed insurrection attempt.

He repeated the comments at an ANC Mandela Day event not long after Mapisa-Nqakula's appearance before parliament, saying: "It is clear now the events of the past week were a deliberate, co-ordinated and well-planned attack on our democracy, on our economy and our people’s livelihoods. Our young democracy and our movement [the ANC] are going through, at the moment, a very difficult time.

"We want to clarify that the position of the government is that as articulated by the president, of an attempt at an insurrection in the country. That perspective is informed by discussions at the National Security Council, which is chaired by the president and receives briefings from the military commanders and other law-enforcement officials.

"Any contrary view ... is not supported by any facts by our law-enforcement agencies," she said.