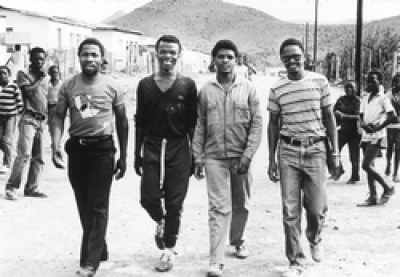 The families of the murdered Cradock Four anti-apartheid activists have turned to the courts to force law enforcement agencies to finally make a decision on the prosecution of those responsible for their deaths at the hands of apartheid police.

Former president FW de Klerk is cited as the 13th respondent in the case, which paints a damning picture of how the National Prosecuting Authority (NPA) and police have failed, for over two decades, to act on the Truth and Reconciliation Commission’s (TRC) directives to pursue possible prosecutions linked to the murders of some 300 activists.

Those murdered activists included Fort Calata, Matthew Goniwe, Sicelo Mhlauli, and Sparrow Mkonto – known as the "Cradock Four" – who were kidnapped, tortured and murdered by apartheid police on 27 June 1985.

"More than 35 years later, and notwithstanding countless pleas, my family and I are still waiting for the South African Police to finalise its investigations and for the National Prosecuting Authority to take a decision whether to prosecute the known suspects or not," Calata’s son Lukhanyo states in court papers.

He continued: I submit that the failure to finalise the Cradock Four case represents a deep betrayal of those who gave their lives for the struggle for freedom and democracy in South Africa. It has also added significantly to the emotional trauma and anguish of their families, surviving victims and the wider community.

"I do not know why the South African state has turned its back on victims who sacrificed so much, but it appears to me that until recently this approach was the product of a policy or decision to abandon or suppress these cases."

The case brought by the families of the murdered Cradock Four activists comes after the Supreme Court of Appeal (SCA) last month slammed the NPA for its failure to prosecute TRC cases – after well-documented political interference in the pursuit of those cases by the Mbeki administration.

The Appeal Court confirmed what the Gauteng High Court in Pretoria had stated in 2019, that there was undisputed evidence from the NPA that, between 2003 and 2017, "the Executive adopted a policy position" that apartheid atrocity cases recommended for prosecution by the TRC would not be pursued.

In a ruling that dismissed former apartheid policeman Joao Rodrigues' bid to secure a permanent stay of his prosecution for the 1971 murder of anti-apartheid activist and teacher Ahmed Timol, the Appeal Court said it was "perplexing and inexplicable why such a stance was taken".

This, Judge Aubrey Ledwaba wrote, was particularly "in light of the work and report of the TRC advocating a bold prosecutions policy, the guarantee of the prosecutorial independence of the NPA, its constitutional obligation to prosecute crimes and the interests of the victims and survivors of those crimes".

All these considerations, the judge said, "should have stood in the way of any such moratorium on the prosecution of TRC era cases".

"That it happened despite the constitutional, legal and other considerations suggests disdain for those important considerations and interests," he added, before stating that the High Court had "rightly recommended" that National Director of Public Prosecutions Shamila Batohi conduct a "proper investigation into these issues" to determine whether "any action… was necessary".

But, for the Cradock Four families, that promise means very little.

Supported by evidence given by former NPA head Vusi Pikoli, they are now asking the Gauteng High Court in Pretoria to compel Police Minister Bheki Cele and National Police Commissioner Khehla Sitole to ensure that the Hawks finalise their investigations into the murders of the Cradock Four within 30 days of the court’s order.

They also want the court to order Batohi to announce a decision to prosecute, or not, the known suspects in the murders of the Cradock Four within 60 days of the court’s order.

The case has far-reaching implications for the prosecution of apartheid-era crime, and will again open debate over why the political masterminds behind the murders of anti-apartheid activists have never been pursued by law enforcement officials in democratic South Africa.

At the time of the murders of the Cradock Four, De Klerk was serving as National Minister of Education at the time that the apartheid government’s State Security Council (SSC) deliberated on the "permanent removal from society" of Calata and Goniwe, who were both teachers.

Lukhanyo Calata states in court papers that De Klerk "attended the SSC meeting on 19 March 1984 where a call was made for the removal of Goniwe and Calata".

He said: They were subsequently detained during 1984 and murdered the following year. He (De Klerk) also attended the SSC meeting on 10 June 1985, less than three days after the 'permanent removal' recommendation was made to the Secretariat of the SSC.

De Klerk has denied any knowledge of, or involvement in, the killings.

Lukhanyo Calata has consistently maintained, however, that the last apartheid president has "my father’s blood on his hands".

At the very least, the court case he has now brought will reveal whether police and the NPA ever even sought a statement from De Klerk about the killings of the Cradock Four – and, if they have not, it will demand an explanation for that failure.

Twitter
More in this category: « Moseneke recommends that the October local government elections be postponed. Transnet’s port and rail operations in KZN province normalise. »
back to top