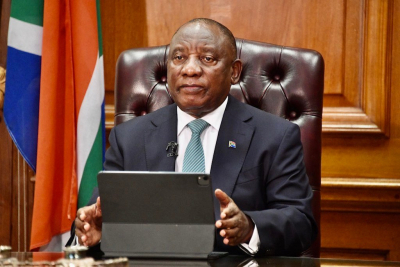 President Cyril Ramaphosa met with more than 90 chief executives and business leaders on Tuesday to discuss the impact of the recent social unrest in Gauteng and KwaZulu-Natal, and the government’s recovery efforts.

In the meetings, Ramaphosa said that there is virtually no part of the economy that has not been affected by the violence, and there is probably no part of the country that will not feel the effects in some form or another because of the way its supply chains work.

"We cannot understate the impact on the country of the disruption, destruction and looting that took place last week. Together, KwaZulu-Natal and Gauteng account for 50% of GDP, and are home to 45% of all South Africans."

The riots and looting that swept through these provinces in July caused severe damage to businesses, as well as South Africa’s reputation as a stable nation. Analysts estimate the week of havoc cost the economy R50 billion in GDP, and put 150,000 jobs at risk.

Ramaphosa acknowledged that the government was not prepared for violence, destruction and looting on this scale, but that the capabilities of the state had also deteriorated in recent years.

"We need to acknowledge the impact of state capture and that the hollowing out of institutions had a direct impact on the capabilities of the state. We have made important progress to take corrective measures, but there is much more work to be done."

Ramaphosa said that the government’s first priority is to restore and maintain stability.

"We have significantly increased the presence and visibility of security forces on the ground in KwaZulu-Natal and Gauteng. The bulk of the 25,000 SANDF personnel has been deployed in support of the police and other law enforcement agencies."

Ramaphosa said that the security forces have been deployed to areas in the provinces regarded as potential hotspots, key economic and government installations, shopping centres, warehouses and factories.

They will also be responsible for keeping critical supply routes open, particularly the N3, and safeguarding the transport of goods.

"The work of the security cluster is being supported by enhanced intelligence gathering and analysis from the ground. Specialised law enforcement units continue investigations into those responsible for instigating this violence with a few to speedy arrests and effective prosecution.

"Special measures are being put in place to manage the large number of suspects who have been arrested for unrest-related offences."

The government’s third priority is providing relief and starting to rebuild, he said.

"We are in the process of providing immediate food relief to households. We are targeting areas affected by the looting and where people have no access to food. Provincial Departments of Social Development and SASSA are providing support in the form of food parcels, cash and food vouchers."

Ramaphosa said that the government is also finalising an extensive social and economic relief package that will support poor households and provide assistance to affected businesses and employees.

This relief package will:

"This package will include both the extension and repurposing of some of the Covid-19 relief measures and specific relief for sectors affected by the violence like retail and property," he said.

The government will announce the details of the package within the next few days.

Twitter
More in this category: « Eskom urges consumers to reduce power usage to ease pressure on the system. Ramaphosa declares Special Official Funeral for Ikosi Mahlangu. »
back to top