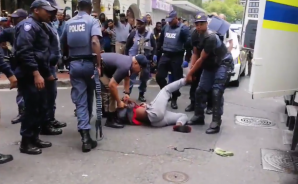 The Police have started removing refugees who have been camping at the United Nations High Commissioner for Refugees(UNHRC) offices in Pretoria and the scuffle ensued between refugees and the police.

Police Brigadier Mathapelo Peters said police in Tshwane were attacked with stones and other projectiles being thrown at them.

The police are outside the United National High Commissioner for Refugees (UNHCR) office in Tshwane where a group of foreign-nationals attempted to enter the premises on Thursday.

Police have pounced on the refugees at the UN High Commission office in Brooklyn. A bus that is taking them away but there is confusion as to where. Information received said to the Brooklyn police station and the Pretoria Showgrounds. @CityTshwane #Refugees @IOL pic.twitter.com/ZaNq0jUmUt

They have been camped out on the sidewalk for weeks, wanting to leave South Africa following a spate of xenophobic attacks in the country.

This week, the Pretoria High Court ruled they had to be removed within three days.

The South African Government has noted the ruling of the Gauteng High Court regarding the #Refugees protesters gathered at the UNHCR regional offices in Pretoria. [Read more] pic.twitter.com/ZkOlyMXlVo

Tweet
More in this category: « South African Airways(SAA) strike will go ahead from 4am on Friday. Luyanda Botha has been handed three life sentences for rape,murder of Uyinene Mrwetyana. »
back to top