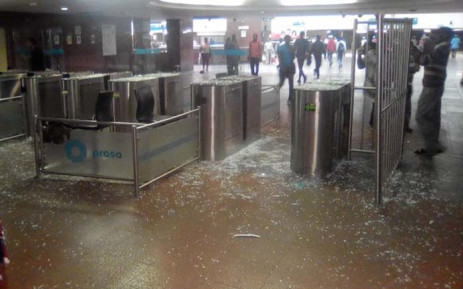 Park Station in Johannesburg came under attack by a group of vandals who damaged property and looted a number of shops this afternoon.

Meanwhile Prasa said that it will beef up the security and increase the presence of police to prevent a recurrence of the incident and it has has appealed to anyone with information about the attack to contact the police.

According to Prasa, a train set was also stoned and the windshield broken, putting it out of commission until repairs can be effected.

However It's understood security workers vandalised Park Station because their contracts were terminated.

The contracts of the security companies that employ them were terminated last month, but the High Court in Pretoria ruled they should be paid at least until the end of December and the security companies have since won a court application against Prasa in which they argued that the early termination of their contracts, without finalisation of an alternative contract put passenger safety at risk, therefore Prasa was ordered to continue the security contracts until new tender is finalised or alternative measures are put in place.

Tweet
More in this category: « Senior state advocate dies in what appears to be an accident when gun goes off in court. The DA has announced its chosen City of Joburg mayoral candidate to take over from Herman Mashaba. »
back to top