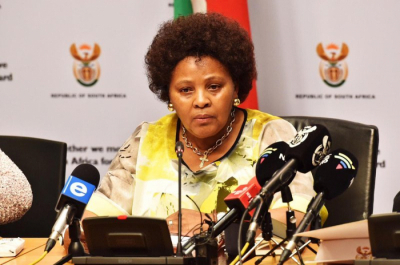 National Assembly Speaker, Nosiviwe Mapisa-Nqakula will preside over the impeachment process against Western Cape Judge President John Hlophe – the man who presided over her election as leader of the country’s highest legislative body.

The impeachment vote comes four months after a Judicial Conduct Tribunal, led by retired Judge Joop Labuschagne, found Hlophe guilty of gross misconduct for attempting to sway two Constitutional Court justices to rule in favour of former president Jacob Zuma, in his 2008 bid to overturn warrants used to seize 93 000 pages of corruption trial evidence against him.

It has also given Hlophe and the Constitutional Court until 3 September to make submissions on why it should not recommend to President Cyril Ramaphosa that Hlophe be suspended.

The NA will now determine Hlophe’s future, as it needs the support of majority vote in order for him to be removed from office and be stripped of his judicial benefits.

This week, Mapisa-Nqakula received a report from acting Deputy Chief Justice Sisi Khampepe on the matter.

The matter is now under consideration, and Mapisa-Nqakula is receiving legal advice on how to proceed, her office has said.

Parliament's spokesperson Moloto Mothapo said that the Speaker had received both the majority and minority decisions of the JSC and the Judicial Conduct Tribunal's reports.

"The decision was upheld by the JSC and has accordingly submitted both its report to the Speaker of National Assembly. The Speaker is receiving advice regarding the appropriate manner Parliament will handle the reports," Mothapo said.

Should Hlophe be removed from office, it will be the first time in a democratic South Africa that a sitting judge is successfully impeached.

In a majority judgment, the JSC concluded that Hlophe was guilty of gross misconduct.

The two complainants - Nkabinde and Jafta - together with Hlophe, were called as witnesses during their hearing, before submitting written representations.

In 2008, Hlophe discussed former president Jacob Zuma and his co-accused Thint separately with Jafta and Nkabinde in their Constitutional Court chambers.

Ultimately, Hlophe’s future will be determined by the National Assembly, which will need a two-thirds majority to have him removed from office.

Twitter
More in this category: « Mabuza calls on SA to work towards achieving better social cohesion. US donate 2.2 million Pfizer Covid-19 vaccine doses to South Africa. »
back to top