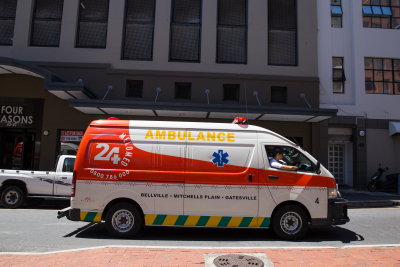 Personal finance website JustMoney.co.za has provided an analysis of ambulance costs in South Africa, including how much much an ambulance trip costs and who pays the bill if you’re unconscious.

All three are interventions used to stabilise patients until they reach a hospital, JustMoney said. Depending on the patient’s state, emergency personnel will perform the necessary life support to ensure their safety.

The main difference between basic and advanced life support is that the former does not include invasive treatments – in other words, a patient’s skin will not be pierced, such as with a needle or a scalpel, if they receive basic life support.

The patient will be billed according to the category their life support falls under.

For example, if your lung collapses in an ambulance and emergency personnel need to puncture your chest to re-inflate it, this will be considered advanced life support because your skin had to be pierced.

"All emergency medical service providers invoice the medical scheme if the patient is insured, or the patient directly if they do not have medical insurance cover," said Shalen Ramduth, director of operations at Netcare 911.

According to Denver Ramnarain, director of Quick Response Services, the National Reference Price List for Ambulance Services (NRPLAS), which was released in January 2009, is used as a guide to determine ambulance prices.

Have a look at the below summary of the NRPLAS document:

Medical aids and paying the bill

In South Africa, medical aid providers have partnered with specific private emergency companies, outsourcing them to clients to call in an emergency.

If patients call a different company, insurers only pay 40-60% of the account, JustMoney said. If you were unconscious when the call was made, the insurer would assume that someone else called, and the full account will be covered.

But this must be motivated by the transporting ambulance service, who will need to advise why the client didn’t follow the correct procedure.

Ambulances are not financial institutions, and, as such, they cannot offer patients credit. "Patients often say they either can’t pay anything, or they didn’t call the service, and so refuse to pay," said Denver Ramnarain, director of ambulance services organisation Quick Response Services.

A patient can refuse care from anyone, regardless of whether they can afford it or not.

If a person refuses transport due to finances, it’s their choice. But the onus remains on the treating medic to make sure that the person is not in a life-threatening situation.

Ramduth said that all emergency medical service providers should assist with life-threatening cases, even where patients cannot pay for the treatment received.

If they decide to wait longer than necessary and not transport a person with life-threatening injuries, this could be considered neglect, which can be reported to the Health Professionals Council of South Africa (HPCSA).

"However, this is hard to prove as the person may decide that they don’t want treatment and may not disclose that it is due to cost. Or the medic may be acting in the best interest of the patient, and they could still die," said Ramnarain.

According to the Western Cape Government’s website, no one will be refused emergency medical services based on their ability to pay for the service.

Ramduth said that South Africans are protected under the National Patients’ Rights Charter, which means that they have the right to medical assistance.

"If an uninsured patient is not experiencing a life-threatening emergency, they have access to the provincial emergency services which will render stabilisation and transportation to a hospital if required, at no cost to the patient."