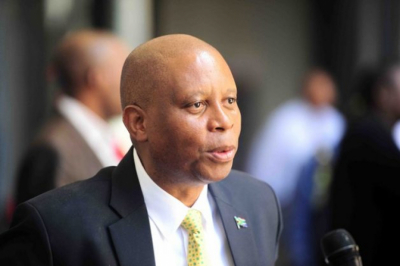 Today, 29 August 2021, ActionSA celebrates its first anniversary as a force for ethical and decisive servant-leadership aimed at building a safe, inclusive and prosperous South Africa for all its people.

Read: Full Speech by Herman Mashaba Below - Together, We Can Fix South Africa:

My wish is that every South African must come to believe that these things are not just possible, they are our destiny as a people. The second truth is that for this destiny to be realized, for South Africa to succeed, the ANC must fail.

The two cannot live in mutual prosperity. One must be sacrificed for the other to live – it will not be South Africa that dies.

Like an idea, ActionSA is only given meaning through the power of people.

Alone, without you, the people of South Africa, it is meaningless. But, with enough South Africans joining us in the work to Fix South Africa, there is nothing that we cannot achieve.

I am pleased to tell you ActionSA's ranks have swelled since that day one year ago.

You have come from other political parties.

You have come from no political parties at all.

You have come, men and women, young and old, black, white, Indian and coloured. Despite initially committing to contest in Johannesburg, Tshwane and Ekurhuleni, structures quickly sprouted in all the 9 provinces of South Africa.

The truth is that we could never have been prepared for how quickly South Africans have embraced ActionSA.

We have been inundated with requests to contest municipalities across the country - from the Western Cape to Limpopo, and, from the Northern Cape to KwaZulu-Natal. We have recently added eThekwini, Newcastle and KwaDukuza, to the list of municipalities that we will contest in these upcoming local government elections.

And, I can tell you now, if these elections are postponed, there will be more municipalities that will join those that we have filed to contest. However, one principle has, and will continue to remain true; ActionSA is not an opposition party. We will not contest to be in opposition.

This is the only way that the work to Fix South Africa can begin.

We will do this by contesting municipalities where we can unseat failing governments, and replace them outright or in a coalition. When we have achieved this, we will deliver for all of the people of those municipalities.

We will use these platforms as public demonstrations to the South African people, far beyond just the residents of these municipalities, that ActionSA is the first and only alternative to the ANC.

Ladies and Gentlemen, over the past year, ActionSA has become a force to be reckoned with.

Even our opponents begrudgingly accept this. We have challenged the broken politics of our country. We have implemented a first of its kind system which changed how political parties chose candidates for you. We have allowed residents to directly tell us who should represent them at the polls by initiating the first candidate election system in South Africa.

This system saw residents of Tshwane, Johannesburg and Ekurhuleni, whether they were members of our party or not, voting on which ActionSA candidate would serve them best.

For the first time, we gave communities the power to choose candidates.

Our public representatives will put their communities first, and their party second.

Immediately after the hard lockdown of last year, ActionSA was the first party to hit the streets and issue awards acknowledging the bravery of the men and women who operated on the front lines of our healthcare system and essential services.

We worked with the South African Medical Association to ensure that unemployed South African doctors, were hired during the lockdown because we knew it was criminal to have our own highly trained doctors, who are sought after by the whole world, sitting at home when they were needed the most. We tackled the employment of Cuban doctors and engineers by our government, as an insult to a highly capable nation, where many have the skills but not the opportunity to work.

In the absence of constitutional authorities, we held public hearings into the water crisis in Hammanskraal – something no political party has done before.

We assembled a panel of independent experts and leaders of society to listen to 3 days of submissions by residents of Hammanskraal, business owners, farmers and civil society groupings about the human rights disaster that is the water provided to the people of Hammanskraal.

Within just a few months a final report was completed, which revealed not just the failure of the City of Tshwane but also the solutions that are needed to solve this problem.

It was given to the Mayor of Tshwane, but I do not doubt that the solution will lie in the hands of Mayor Abel Tau shortly after these local government elections.

We have initiated the first Class-Action Lawsuit representing now over 500 businesses against the President, Minister of Police and the ANC, for the insurrection that took place in KZN and Johannesburg.

Through the precedent we will set, we will send out a very expensive message to our government and politicians that they can, and will be held accountable for either their inactions or their actions that directly lead to the destruction of property.

In addition to this, ActionSA gave the President notice; South Africans should never fall victim to the ANC's factional politics.

We have stood alone in fighting for the people of Lily Mine, the families and former miners, in their nearly 6-year bid to retrieve the bodies of their loved ones, trapped underground in February 2016 when the mine collapsed. Please allow me to acknowledge the presence of Mr Harry Mazibuko, the spokesperson of the affected families and miners of this tragedy.

We have fought for the private prosecution of mine management who were found to be criminally responsible for the collapse of the mine, by the 2017 DMRE report. Because of our efforts, an official NPA inquest has been initiated to begin in 8 days.

We have run an expert-driven policy development process that will make ActionSA a party that delivers hope through credible solutions for our country. In the past, I have seen policies written by politicians. Economic policies by politicians who have never created a business or employed a person.

Health policies by politicians who have never healed a patient.

Criminal justice policies by politicians who have never dared to pursue a criminal.

We have changed this in ActionSA. We have run a policy development process with professional South Africans. They have come forward in their numbers with incredible insights into the issues they grapple with every day in their respective fields. They know what needs to be done in our schools, hospitals and police stations.

They have witnessed daily, for many years, how these solutions have been ignored by people who were in positions because of who they knew and not what they knew.

We have assembled a leadership team of great South Africans who have a track record in putting their country first and their party second.

Leaders like Dr Makhosi Khoza, our KZN Provincial Chairperson, who stood up to Jacob Zuma at the height of his powers, and publicly declared that she would vote for a motion of no confidence in him.

Leaders like Vytjie Mentor, our Western Cape Provincial Chairperson, whose bravery is the reason there is a state capture commission of enquiry today – because she exposed ministerial posts being offered by the Guptas.

Our leadership team left political parties which were failing South Africans and have dedicated themselves to ActionSA because the country must always come before the party.

I grew up very close to my grandfather after my father passed when I was 2 years old. He was a wise man who taught me that we must always listen to what people say, but, trust what people do.

In a party that is just a year old today, we have former Mayors, MMCs, Chiefs of Staff, a Chief of Metro Police, a CEO of SALGA, Chairpersons of Portfolio Committees and the list goes on and it goes on. Not many parties can claim this kind of experience in government in their first year of existence.

We can show what was delivered in the City of Johannesburg, in just 3 years, not just as evidence of our commitment to Fix South Africa, but as the core offer that we make to other municipalities.

This is our track record in government.

It is a guarantee that we can offer real services to people who have grown weary of broken promises and political lies.

It is a foundation of trust on which the people of Soweto can believe our promise to end the abuse they endure at the hands of ESKOM, and negotiate the future supply of electricity from City Power.

Once that is accomplished, we will ensure that every person who can pay for electricity here, does pay and that those unable to pay, receive the same basket of free basic services as everyone else in Johannesburg.

It is the reason why people can believe that I will take active measures to combat illegal immigration that continues to impact our cities.

It is a foundation that the people of Hammanskraal can believe when we say that we will deliver to them clean and safe drinking water.

One year after its birth, I stand before you with this party that has grown and challenged long-established parties.

I can only take a small share of the credit because the credit lies with you the South African people.

It is your love of this country, it is your hatred for what has been done to it and it is your belief in a better tomorrow that will give ActionSA the support we need to Fix South Africa.