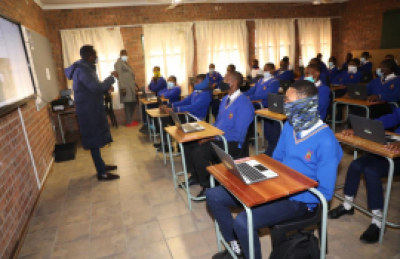 In a media briefing on Sunday, the minister said that the CEM agreed that the department must retain the amended 2021 school calendar as it was from its very last amendment – specifying that the October vacation period will not be interfered with.

Instead, the minister said that lost teaching time would have to be recovered on a school or district level, though this must also be “within reason”.

Under the current 2021 school calendar, government school students are on holiday from 1 October until 11 October.

All schools reopened on 26 July as part of the country’s move to an adjusted level 3 lockdown after a month-long level 4 lockdown.

While the education department shifted the June holidays to accommodate the closure, students still lost five teaching days over the period.

It was announced earlier in August that the department had decided to scrap the holidays so that educators could claw back this lost teaching time between 4 and 8 October.

This was met with backlash from teachers’ unions and school governing bodies, which led to a swift withdrawal of the decision, and the department said it was only a proposal.

According to data from the latest National Income Dynamics Coronavirus Rapid Mobile Survey (NID-CRAMS), the impact of disrupted education since the Covid-19 outbreak has been devastating, with learners between 75% and a full school year behind where they should be.

Rotational attendance, sporadic school closures, and days off for specific grades have resulted in school children losing 54% of learning time.

This is most likely for children living in informal urban and rural settings, with household poverty also playing a critical role.

The total number of out-of-school children is now up to 750,000, said UNICEF South Africa.

According to Stellenbosch University’s professor Martin Gustafsson, schools lost about 80% of learning time in 2020, and so far, in 2021, about 50% of the school year has been lost for a large number of learners.

Even with the best catch-up programs, he said it is now considered nearly impossible to fully recover from the learning losses.

Twitter
More in this category: « Sisulu family confirms the passing of Walter Sisulu's grandson. Ramaphosa to update Parliament on the country's recovery plan. »
back to top