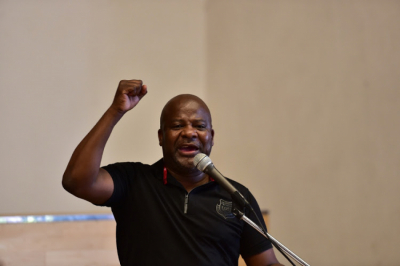 Nelson Mandela Bay Executive Mayor, Nqaba Bhanga, has been injured in a motor vehicle accident in which two people died.

According to a statement on Sunday, NMB said mayor Bhanga was recovering in Netcare Greenacres hospital.

The Municipality said Bhanga, who is also the DA’s provincial leader and mayoral candidate for the upcoming local government elections, "was driving his own vehicle at the time."

He said the mayor will undergo surgery on Sunday afternoon due to internal bleeding from injuries sustained.

"It is alleged that at about 23:30, at the intersections of St Leonards Drive and Uitenhage Road, two vehicles, a grey Audi and a Navy-Blue Mercedes Benz, collided with each other," said police spokesperson, Colonel Priscilla Naidu.

"Both occupants, identity still unknown (male and female) in the Audi died on the scene and the alleged driver of the Mercedes Benz is currently in hospital."

"Anyone who can assist with the identity or tracing the next of kin can contact D/WO Errol Kleinhans at Algoa Park Detectives on 0823026419 or the Crime Stop number on 08600 10111, or your nearest police station."

The Democratic Alliance has expressed their sincere condolences to the families of the deceased.

Twitter
More in this category: « Ramaphosa to update Parliament on the country's recovery plan. Gauteng reaches 3-million milestone with 1.3-million people fully vaccinated. »
back to top