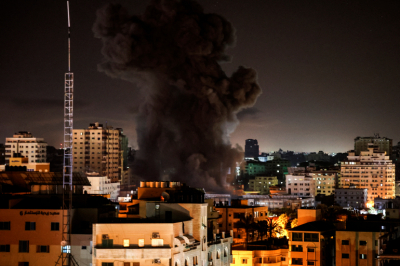 Gantz travelled to the West Bank city of Ramallah for "security, civilian, and economic discussions" with the 85-year-old Palestinian leader, officials said on Monday.

They came hours after Israeli leader Bennett returned from Washington, DC where he met US President Joe Biden at the White House.

Gantz, the head of a centrist party in Israel’s government coalition, told Abbas "that Israel seeks to take measures that will strengthen the PA’s economy. They also discussed shaping the security and economic situations in the West Bank and in Gaza", it added.

"They agreed to continue communicating further."

Al-Sheikh confirmed the meeting on Twitter, while Gantz’s office said the defence minister and Abbas held "a one-on-one meeting" after the larger talks.

President Mahmoud #Abbas met this evening in #Ramallah with Mr. Benny #Gantz, they have discussed the Palestinian-Israeli relations on all aspects. https://t.co/hRJYh4zZNf

He said Sunday’s meeting "was a continuation of the PA delusion of the possibility of achieving something to our people through the failed settlement path".

The meeting "came at a time when the Israeli forces are continuing their attacks on Gaza and maintaining its years-long blockade on the territory," he said.

The blood of [Palestinian] children killed by the [Israeli] occupation army upon orders from Gantz is still on the ground and has not dried yet," Selmi said.

A Palestinian official, speaking on condition of anonymity, said Gantz and Abbas discussed possible steps towards improving relations – including Palestinian demands for a halt in Israeli military operations in the occupied West Bank, allowing the unification of families with relatives inside Israel, and allowing more Palestinian workers into Israel.

Twitter
More in this category: « Trade federation,Cosatu reiterate call to scrap e-tolls in Gauteng. Lesufi condemns stabbing of a Grade 8 learner in Alexandra. »
back to top