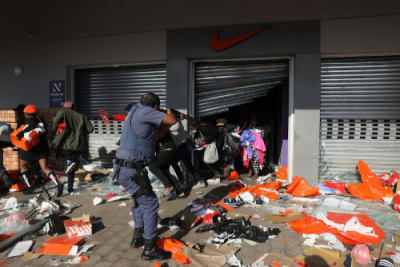 The woman behind the controversial Twitter account "Sphithiphithi Evaluator" has been granted bail by the Germiston Magistrate’s Court.

The 36-year-old, who has been identified as Zamaswazi Majozi, made her first appearance in court on Monday following her arrest over the weekend.

Majozi was granted bail of R3,000 with conditions that she surrender her passport and report to the nearest police station daily, according to Directorate for Priority Crime Investigation (DPCI) – also known as the Hawks – spokesperson Katlego Mogale.

Mogale said Majozi must also ensure that she informs the investigating officer if she intends to leave Gauteng.

Majozi was arrested on Saturday for incitement to commit public violence via social media and other platforms in relation to the unrest that took place last month.

She was nabbed during a search and seizure operation in Leondale, Ekurhuleni.

Her case has been postponed to 18 October 2021 for further investigation.

Meanwhile, another suspect who was arrested on Saturday by the Hawks for allegedly inciting public violence was granted bail on Monday.

The 35-year-old man made a brief appearance in the Pietermaritzburg Magistrate’s Court.

The suspect, who’s understood to be a security guard at a local supermarket, faces two charges of contravening the Riotous Assembles Act.

"The charges relate to the incidences of looting and public violence that occurred in KwaZulu-Natal in mid-July, in particular, the burning of the Brookside Mall," Kara said in a statement.

His case was postponed to 6 September for a formal bail application.

Thus far, about 18 suspects have been arrested by Saps [South African Police Service] and DPCI. Some have already appeared in various courts in Gauteng, Free State and KwaZulu-Natal, with others having been granted bail and others remanded in custody," Mogale said.

Twitter
More in this category: « Ramaphosa warned about the controversial new change for NHI. Eskom considers R106bn in wind and solar investment by 2030. »
back to top