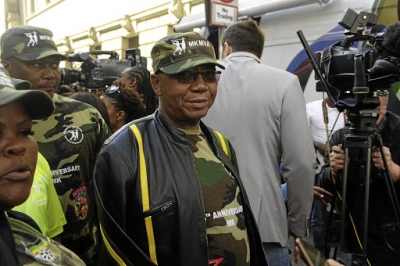 Maphatsoe’s brother, Joseph Maphatsoe, said the former deputy minister of defence and military veterans died peacefully in his sleep on Tuesday afternoon at his home in Meyersdal, Alberton.

"We’ve heard the media has been saying he died due to Covid-19 complications. No, we totally dismiss that. He died peacefully in his sleep in his house yesterday at 12pm," Maphatsoe said.

"During his tenure, the Ministry of Defence was changed to Defence and Military Veterans to accommodate military veterans, and to form a department separate from the Department of Defence with its own budget and administration.

Early in July, the ANC confirmed that it had disbanded the MKMVA as part of the cleaning up its structures.

Under Maphatsoe, the MKMVA was at loggerheads with another group of ex-combatants, the MK Council, led by party leaders loyal to President Cyril Ramaphosa.

Maphatsoe's close ally, suspended ANC member and MKMVA spokesperson Carl Niehaus, confirmed Maphatsoe's death: "I can confirm that he passed earlier today. We can not say anything on the cause of death, as we are still talking to the family."

He went to Angola and the Soviet Union to receive his training and was also exiled in Uganda before returning to South Africa.

Maphatsoe's political career has also seen him leading the ANC Greater Joburg Zone 7 where he served as zonal treasurer.

He was an avid supporter of former President Jacob Zuma until his final days, often criticised the governing party, and was no stranger to controversy.

Twitter
More in this category: « Cogta embarks on a review of 25 years of local government. Special Tribunal orders former Transnet executive Herbert Msagala to pay back R26m. »
back to top