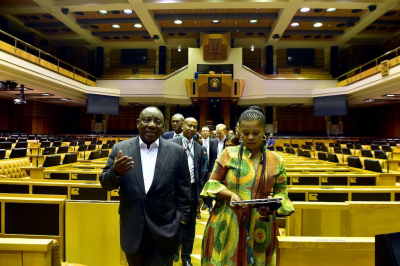 Khusela Diko has been fired as President Cyril Ramaphosa's spokesperson, but will retain a position in the public service.

This was confirmed by the office of the Presidency on Tuesday evening following the disciplinary process.

The Presidency has finalised its disciplinary process against Diko, and found that she failed to disclose her interests in certain companies as required by public service regulations on the disclosure of financial interests.

Diko has since been served with a written warning for the offence.

"The action taken by the Presidency management was in compliance with a recommendation by the Special Investigating Unit (SIU) that Ms Diko be disciplined for her failure to disclose certain interests. This recommendation arose from an SIU investigation into government’s procurement of Covid-19 personal protective equipment," said the Presidency in a statement on Tuesday.

While it was widely reported earlier that Diko had been reinstated to her position of spokesperson, the Presidency said she would not be returning to the office.

Diko,who is currently on maternity leave, will be moved to a different position in the public service, while Tyrone Seale continues as acting spokesperson to the President.

The Presidency initiated an internal disciplinary process against Diko after she took special leave in July 2020, in light of an investigation by the SIU into personal protective equipment (PPE) procurement at the Gauteng department of health.

This was in relation to the awarding of two contracts by the provincial department of health to Royal Bhaca, a company owned by Diko’s late husband,Thandisizwe Diko.