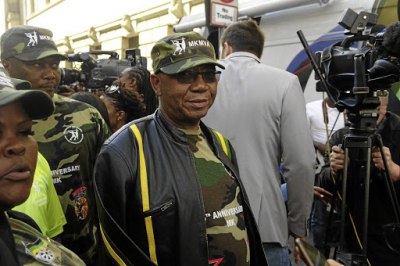 Tributes continued pouring in after the death of former deputy minister of defence and military veterans and leader of the now-disbanded Umkhonto We Sizwe Military Veterans Association (MKMVA), Kebby Maphatsoe.

MKVA national spokesperson Carl Niehaus said they were shattered to announce that the president of MKMVA, comrade Kebby Maphatsoe, has passed on.

"Comrade Maphatsoe dedicated his whole adult life to the liberation Struggle, both as a member of the ANC and MKMVA. With this tragic, and untimely, passing on of president, comrade,Maphatsoe the whole ANC, and the community of MK veterans, have lost one of our most dedicated members and liberation soldier," Niehaus said.

He said Maphatsoe was instrumental in the formation of MKMVA, and led it with dedication and distinction."Comrade Maphatsoe played a pivotal role in the establishment of the Department of Military Veterans (DMV) and the South African National Military Veterans Association (SANMVA).

During the period that he was deputy minister of defence he worked with dedication for the cause of the improvement of the plight of military veterans, and specifically MK military veterans. He leaves a deep void, and a great legacy," Niehaus said.

The ANC said it received the news of the passing of its Member of Parliament with shock and sadness.

"Death has robbed the liberation movement of one of its most courageous and fearless cadres.The ANC will miss the constructive role he was playing in the efforts of the ANC to forge unity among former MK combatants and preparations towards the 60th anniversary of the people's army," said ANC national spokesperson Pule Mabe.

"We salute him for his dedication and unwavering commitment to the national democratic revolution.

"The ANC conveys its heartfelt condolences to his family, friends and the entire mass democratic movement. We hope they will find solace in the knowledge that the entire nation shares in their grief. We wish them strength and fortitude as they mourn their loved one," Mabe said.

Maphatsoe previously served as the deputy minister of defence and military Veterans, a position he was appointed to in May 2014.He was also the national chairperson of the military veterans of uMkhonto we Sizwe (MK), the military wing of the ANC and also dabbled in politics from a young age when he joined the Congress of South African Students and also served as a member of the South African Youth Congress.

Twitter
More in this category: « Zulu withdraws Green Paper on controversial social security and retirement plan. Beer industry wants government to change the way it taxes alcohol. »
back to top