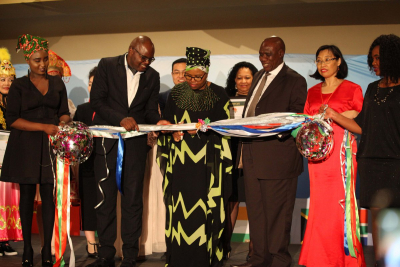 ANC donor and MP Dr Xiaomei Havard believes a "leaked intelligence report" implying that she was spying for China is a smear campaign to discredit her.

The State Security Agency (SSA) purportedly raised concerns about Havard possibly sharing classified information with China, according to a report by News24 on Wednesday.

"I never engage any spy allegations. Only God is with me, behind me. God will punish all these mafias and their stories [and] put the evil to hell. I've had enough, have to take legal action against the evil,"Havard said.

Two of her non-profit companies were, at the time, under the spotlight after allegations by international scholars that, through them, she was linked to a shadowy organisation within the Chinese Communist Party, the United Front Work Department (UFWD).

Zizi Kodwa, deputy minister responsible for state security in the presidency, said in a statement that the SSA distanced itself from "wild" allegations levelled against Havard.

He said the SSA was aware of the "escalating information peddling by both unscrupulous members and external subversive forces who are deliberately and intensely peddling false information through disinformation and misinformation in order to harm the integrity of the agency".

"The agency is governed by the Intelligence Services Act 65 of 2002 as amended and the National Strategic Intelligence Act 39 of 1994 as amended. These legal instruments have been designed not only to spell out the mandates of Intelligence, but also to preserve and protect its integrity and that of the citizens.

"We therefore condemn with the contempt it deserves the attack on the integrity of Ms Havard and the malicious portrayal of the Chinese government as hostile to South Africa’s national security.

Havard, said Kodwa, was "like any other South African, is entitled to the rights contained in our Bill of Rights as enshrined in the Constitution".

He said South Africa continued to enjoy fraternal relations with China – "built through solidarity, trust and human dignity over years of difficulty facing South Africa and the continent".

Meanwhile ANC chief whip Pemmy Majodina's office says it is not privy to intelligence reports which suggest there is a "high likelihood" that party MP Xiaomei Havard may be sharing classified information about South Africa with the Chinese Communist Party.

Twitter
More in this category: « Ramaphosa emphasises the need for investment in Limpopo. Another opportunity to register to rewrite matric supplementary exams. »
back to top