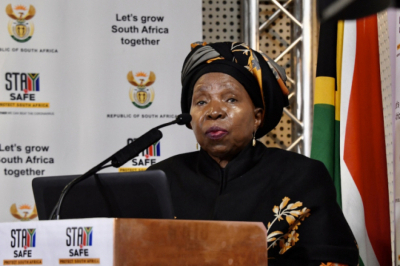 President Cyril Ramaphosa’s cabinet has approved the extension of South Africa’s national state of disaster by another month.

The extension means that the state of disaster will now run until 15 October 2021.

Cooperative Governance and Traditional Affairs minister Nkosazana Dlamini Zuma had not yet officially gazetted the extension at the time of writing.

While the national state of disaster was originally set to lapse on 15 June 2020, the act provides that it can be extended by the Cooperative Governance and Traditional Affairs (Cogta) minister by notice in the gazette for one month at a time before it lapses.

However, it has also faced criticism for giving national government wide-ranging powers over the lives of citizens, with almost no limits and little to no oversight from parliament.

While South Africa has moved past the peak in its third wave of Covid-19 infections, cabinet has again raised concerns about increasing infection reproduction rates.

Minister in the presidency, Mondli Gungubele, said that the government was still considering several factors before lowering lockdown restrictions for the country.

He said that there were no set plans for president Cyril Ramaphosa to address the nation and that the lockdown regulations will continue in line with the latest state of disaster extension.

Some provincial leaders, such as Western Cape premier Alan Winde, have requested that lockdown be reviewed and that the national government look to lockdown level 2 as its next step.

A move to level 2 would see fewer restrictions on the sale of alcohol, a shorter curfew, and for larger gatherings.

However, health minister Joe Phaahla has warned that South Africa is not yet past the third wave of infections in the country and that it is likely to face a fourth wave of Covid-19 cases in November.

Phaahla said the third Covid-19 wave continues to behave unpredictably and is notably different from the country’s first and second waves.

He said that the long tail of third-wave cases is a particular concern, as the country faces moving from one wave of cases straight into another over the summer.

Twitter
More in this category: « Government to introduce stricter BEE rules for businesses in 2022. Cabinet welcomes outcomes of G20 Compact with Africa meeting. »
back to top