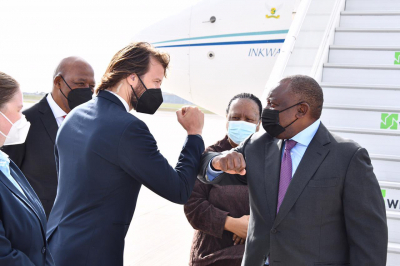 South Africa’s Cabinet has welcomed the outcomes of the G20 Compact with Africa meeting held in Berlin, Germany, last month.

Currently, 12 African countries have joined the Compact with Africa initiative as well as the Democratic Republic of Congo in its capacity as the chair of the African Union.

The meeting was held to discuss Africa’s vaccine production and to find ways to improve the business environment and to increase investment.

"South Africa is a member of the G20 and co-chairs the G20 Compact with Africa initiative alongside Germany. President Cyril Ramaphosa also met with Chancellor Angela Merkel to discuss bilateral and regional issues," a Cabinet statement on Thursday read.

During a press conference at the Compact with Africa initiative, President Cyril Ramaphosa highlighted that the country lobbied for vaccine equality and for the promotion of business on the continent.

"It is to this end that South Africa and India made a proposal to the World Trade Organisation that there should immediately be a temporary suspension of the intellectual property rights so that vaccine production should be spread to other countries as well,"Ramaphosa said.

Ramaphosa added that financial help for the continent was also on the agenda.

"We discussed at great length, with the participation of the IMF and the world bank on how finances can be made available to boost the African economies that have been damaged by the pandemic. We focussed on the [Special Drawing Rights] and argued that the SDRs need to be increased.

"There are 650 billion dollars that are being made available and the more developed countries are going to take a large portion thereof and we’ve argued that rather than Africa only have 33 Billion dollars, we need to have up to 100 billion dollars," he said.

The country’s dire unemployment statistics have brought to the fore the urgency for the public and private sector to expedite the implementation of the Economic Reconstruction and Recovery Plan (ERRP) to address the devastating effects of COVID-19, says Cabinet.

The message was reiterated by the executive during this week’s Cabinet meeting, Minister in the Presidency, Mondli Gungubele, told reporters during a media briefing on Thursday.

Results for the second 2021 Quarterly Labour Force Survey (QLFS) released by Statistics South Africa last week revealed that unemployment in the period had increased by 1.8 percentage points. This meant joblessness had increased from the previous quarter’s 32.6% to 34.4%.

Reading the Cabinet statement, the Minister said the poor results continue to bring to the fore the urgency for all sectors working with government to expedite the implementation of the Economic Reconstruction and Recovery Plan (ERRP) to deal with the devastating effects of COVID-19.

"The ERRP is at the heart of government’s efforts to rebuild and transform the economy so as to create more jobs, especially for young people," he said.

Gungubele said Cabinet was encouraged that the construction, trade and transport sectors, had created new jobs during the period under review.

"A social compact to rebuild and transform our economy as part of a shared responsibility will ensure we recover quickly as a country," he said.

Twitter
More in this category: « Government extends state of disaster while it weighs on restrictions. R21bn allocated to implement National Strategic Plan on GBV & Femicide. »
back to top