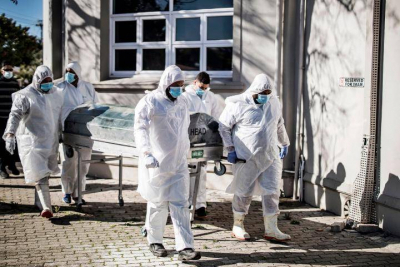 The National Institute for Communicable Diseases (NICD),reports 9,203 new COVID-19 cases that have been identified in South Africa, which brings the total number of laboratory-confirmed cases to 2,796,405. This increase represents a 16.1% positivity rate.

NICD said a further 418 COVID-19 related deaths have been reported, bringing total fatalities to 82,914 to date with 16,593,467 tests have been conducted in both public and private sectors.

Meanwhile Cabinet acknowledged the decline in new COVID-19 infections, hospital admissions and reported deaths,and it has noted the increase in infection reproduction rates.

Addressing the media on the outcomes of the Cabinet meeting held on Wednesday, Minister in the Presidency Mondli Gungubele said the executive received a progress report on the vaccination rollout programme from the Department of Health.

The update, he said, included epidemiology - the branch of medicine which deals with the incidence, distribution and possible control of diseases and other factors relating to health - and surveillance.

"Cabinet noted the decline in new infections, as well as hospital admissions and reported death cases. Cabinet however noted the increase in infection reproduction rates," he said at a media briefing on Thursday.

The Department of Health he said, has assured Cabinet that more work is being done "to understand and contain the reported school cluster outbreaks, particularly in the Eastern Cape".

"Strict adherence to the non-pharmaceutical health protocols remains the most effective defence against the spread of the virus,"said Gungubele.

He said the increased number of vaccination sites, extended vaccination days and the provision of free transport by provinces would result in a significant increase in the number of people who will be fully vaccinated.

Twitter
More in this category: « Eskom wins R1.3 billion judgement against Emfuleni Local Municipality. Kebby Maphatsoe to be laid to rest on Sunday. »
back to top