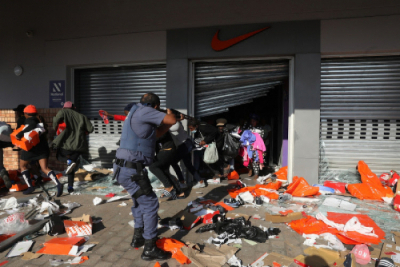 President Cyril Ramaphosa says the additional interventions that have been implemented following the recent devastating civil unrest have helped to sustain millions of jobs.

"The interventions that we have implemented have sustained millions of jobs, prevented the closure of a number of businesses, and provided relief to the most vulnerable in our society.

"Thus far, close to 12 million people have applied for the social relief of distress grant, and SASSA has started processing these and paying out," the President said on Friday.

He was responding to oral questions during a hybrid sitting of the National Assembly.

The President said government has provided a security net for many South Africans in the wake of riots and destruction to property and the pandemic, including the reinstatement of the Social Relief of Distress Grant until March 2022.

"We are also providing support to businesses who were affected by the unrest through grant funding and additional support from the Unemployment Insurance Fund, as businesses take time to reopen.

"We have also committed to back SASRIA, our state-owned reinsurance company, to ensure that it is able to honour all valid claims in full.

"We have had the Employment Tax Incentive, which has worked extremely well in providing jobs to young people. This has now been expanded for a period of four months, and payment of PAYE and excise taxes has been deferred to help businesses to recover."

The President said these measures are funded primarily through additional revenue received as a result of the strong performance of our mining sector and other exports.

"However, we have a long way to go in our economic recovery.

"The statistics released for the second quarter of this year are a reminder of our unemployment crisis and the extent of poverty in our country."

He said while the interventions contained in government’s Economic Recovery and Reconstruction Plan are necessary and significant, these are not enough.

"The time has now come for us to assess how far we have come, to reflect on the choices that confront us as a nation, and to take bold actions to achieve economic progress.

"That is the singular focus of my mission and the mission of this government, and we will be articulating this in time to come."

Twitter
More in this category: « ConCourt orders elections to go ahead between 27 October and 1 November. Ayanda Dlodlo launches government integrated Public Service month. »
back to top