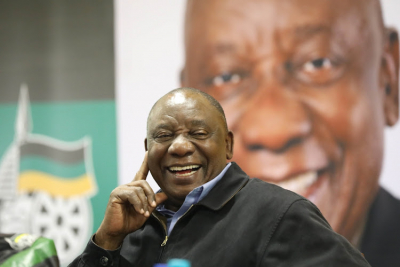 The ANC’s national executive committee (NEC) held a special meeting on Friday, followed by a three-day virtual lekgotla from Saturday to Monday.

While delivering his political overview at the the ANC's Lekgotla on Saturday,President Cyril Ramaphosa confirmed that the State Capture Commission of Inquiry is set to report back on its findings in October 2021, and the report will be made public.

The ANC NEC lekgotla is being attended by ANC leaders, ministers and their deputies, premiers and mayors.

He also noted that the ANC would be, "... criticised in the main due to an exaggeration of the role of the Deployment Committee and misrepresentation of its ambit, as well as for the management of the work our MPs do in Parliament and parliamentary structures".

Ramaphosa also acknowledged that, "... specific allegations have been levelled against leaders and deployees of the movement and there is a concerted drive to tie these allegations to the organisation and portray a picture of a corrupt and incompetent ANC and ANC-government".

As such, he said the embattled ANC needed to be, "... ready to address", these allegations, "... and develop concise messages before the report comes out".

He also cautioned the ANC that, "... there is a palpable feeling of anger towards and disillusionment with this government", and as a result, the governing party needed not to underestimate this general feeling among the country's citizenry.

"The people in this meeting bear the bulk of the responsibility for turning this around. It is our collective duty to address this," said Ramaphosa.

The President also addressed the, "... high levels of gender-based violence, periodic and sometimes violent protests and persistent reports of corruption", saying these contribute, "... to an environment where South Africans feel unsafe".

"Our most important priority should be to create a society where all citizens feel and are safe. I have already set out what steps we are taking to address gender-based violence," said Ramaphosa.

Another area of focus for the Lekgotla was the "traumatic period" that the country had been thrust into as a result of the Covid-19 pandemic.

He said the responsibility fell on the ANC as the governing party, "... to bring hope to the nation and prove to them we can improve their lives. We must serve the people diligently, ethically and with distinction".

Ramaphosa has also shied away from commenting on the Constitutional Court judgment saying the ANC must campaign to win the polls.

The Concourt on Friday dismissed the Electoral Commission of South Africa’s (IEC) application to postpone the 2021 local government elections to next year.

The ANC has failed to register candidates in 93 municipalities before the IEC deadline.

Having said that, the ANC highlighted the lack of resources and the impact of the pandemic on their ability to select suitable candidates.

"The Constitutional Court has confirmed that we will have local government elections on a date between 27 October and 1 November 2021. The movement will have to conduct the campaign and mobilise under pandemic conditions and with limited resources," said Ramaphosa.

Further compounding the already dire situation for the ANC, the IEC has also indicated that while the deadline for registering candidates was supposed to be 21:00 the system only closed at 21:34 with 74 candidates being registered after the cut-off time - the majority of which is understood to be ANC members.