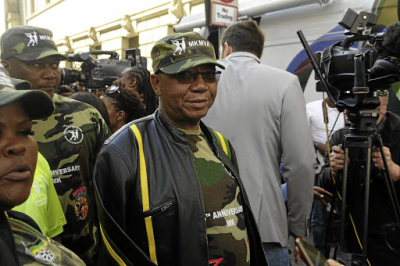 Maphatsoe, an avid supporter of former president Jacob Zuma, was no stranger to controversy and often landed in trouble for some of the things he said.

In 2014, the then chair of the now disbanded Umkhonto we Sizwe Military Veterans' Association caused an international furore when he called then Public Protector Thuli Madonsela a CIA agent.

Maphatsoe, who was deputy defence minister at the time, later withdrew his statement following consultations with the ANC. He also apologised for any hurt he caused.

He had claimed that Madonsela was being used by international spy agencies to destabilise South Africa and the ANC. His attack on the Public Protector came after Madonsela had written to Zuma to ask when was he going to respond to the recommendations in her report on his Nkandla homestead.

In the midst of the outcry over this accusation, it emerged that the one-armed deputy minister had never seen action as an MK soldier. Instead, he had been a camp cook.

Maphatsoe spoke about how he lost his arm after EFF leader Julius Malema mocked him about it.

He said he lost his arm in Uganda in 1991 after he and a group left an ANC camp to come to South Africa to discuss the conditions at the camps that they were unhappy with. He claimed he was shot after they were mistaken for rebels from the Lord's Resistance Army.

"When the guy saw us, out of shock he just started shooting at us. He shot me in my right arm and I immediately lost consciousness.

Maphatsoe said he was proud of his time in the kitchen.

"I'm very proud of that. To work in the kitchen in exile, you must have been a trusted person, highly vetted.

"Not everyone works in the kitchen because you are taking care of the lives of our people. People don't understand – they think if you were working in the kitchen you were useless."

Maphatsoe left South Africa in 1984. He first went to Charleston in Lusaka, Zambia, to join an ANC camp. He received further training in Angola, and in the Soviet Union.

From 1989, MK units had to leave Angola after the UN brokered negotiations between apartheid South Africa, Angola and Cuba, leading to the independence of Namibia.

Maphatsoe was among the group that was sent to Uganda.

The government's profile page on Maphatsoe says he led the MK Military Veterans Association (MKMVA) as regional chairperson, and was elected provincial chairperson in 2007. It also states that, under his political direction, the MKMVA became an integral component of the ANC and for the first time the association was in the central agenda of the ANC political framework with the achievement of 'progressive resolutions' for the association and the ANC.