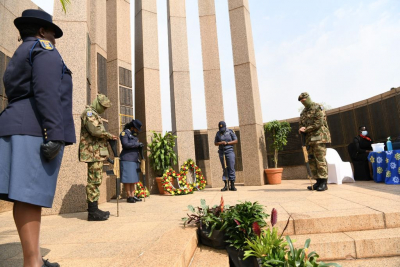 President Cyril Ramaphosa on Sunday called on SAPS to implement its police safety strategy, and urged officers to defend their own lives and those of citizens against criminals.

Ramaphosa was addressing a police commemoration day held at the Union Buildings in Pretoria.

The annual event is held in remembrance of police officers who died in the line of duty.

Ramaphosa paid tribute to the fallen officers, adding that the killing of police members undermined the state.

"Today we cherish the memories of 34 members who paid the ultimate price for their commitment and determination to serve the South African people. Yours is indeed a difficult calling that demands selflessness.

Ramaphosa said that police officers continued their work despite severe financial constraints which he said Minister of Police Bheli Cele and SAPS commissioner Khetla Sitole frequently reminded him about.

"These fallen heroes were colleagues. They were sons, daughters, husbands, wives, brothers, sisters, loving fathers, and caring mothers. They were also neighbours and friends to many of us. They are and they will continue to be missed,"he said.

"Occasions such as this are a stark reminder of the perils and the dangers our men and women in uniform face as they carry out their duty to serve our nation and to protect our people.

"We fully understand the anxiety that accompanies the knowledge that you could leave your home for work never again to return," Ramaphosa said.

"Today we salute all who work in the SAPS putting the safety and security of their family of the citizens above their own."Harking back to the imagery from the riots where South Africans organised themselves to prevent looters from attacking infrastructure, homes and businesses in co-operation with the police and the army.

Ramaphosa called on the public to "partner with the police" in the fight against crime.

"It is because of the collaboration and determination as well as the real focus between ordinary citizens and structures such as the community police forums that police, the SANDF and other law enforcement agencies were able to contain the violence and looting that erupted in KwaZulu-Natal and Gauteng in July," he said.

"I have appointed a task team to determine what caused the response by police and other law enforcement agencies to be brought into question," said Ramaphosa.

"I am hopeful that the outcomes of this review and inquiry will guide us and enable us to strengthen our resolve even more on how we should be even more prepared to prevent such events and to gain the confidence of our people with regards to defending and protecting our people against the actions of instigators of unrest and those with criminal intent.

"He said criminals lived within the communities on which they preyed.

"We must therefore work towards strengthening community-police relations and bring strategic stakeholders on board to bolster the efforts of police to bring down the levels of serious and violent crime."