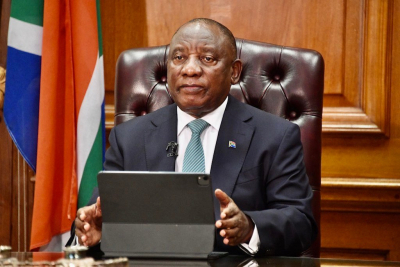 President Cyril Ramaphosa says that the government aims to establish a citizen-centred public service delivery system that is seamless, adaptive and responsive.

Writing in his weekly open letter to the public, the president said that public servants have been in the spotlight for the wrong reasons in recent years.

This adaptive service delivery model, or District Development Model, he said, would bring development to where it is needed the most.

"We have set ourselves the challenge of building a capable, ethical state. We remain firmly on course towards professionalising the public service and transforming it into a group of men and women who are able and committed to serving our people and their interests.

"We call on public servants to be part of this process by identifying ways in which we can realise a public service focused on meeting the needs and advancing the interests of citizens, "Rampahosa said.

"Our commitment to building a state that is ethical, capable and above all developmental necessitates that civil servants see themselves not merely as state functionaries but as development workers."

The president said that the vast majority of government workers are ‘exemplary civil servants’ and that those ill-suited for public service will be rooted out.

The district-based model, which Cogta minister Nkosazana Dlamini-Zuma is spearheading, is seen as key in closing the 'disconnect' between government and a national and local level.

Dlamini-Zuma said that the model seeks to strengthen the local sphere of governance – moving away from silo planning, budgeting and implementation.

The minister said that the new model would provide a more tangible, common vision for development’ of the country.

By adopting a long term view and interconnecting the local economies, we are able to re-imagine a better community, district and nation."

To assist at a local government level, Dlamini-Zuma said that the government plans to employ skilled people at 'district hubs' to avail shared skills that local municipalities lack.

"The hubs form part of the district’s capacity and will link the localities to provinces and national departments," she said.

The hubs will also house critical and scarce skills such as engineers, planners, ICT specialists and administrators, to the districts and local municipalities.

Dlamini-Zuma said that the district model would also see budget changes across government, ultimately unifying finances into a singular budget.

She said that the government would implement the model through the specialisation and reprioritisation of each department, state entity, and municipality’s plans and budgets.

"The 'One Plan' which will inform the 'One Budget' is an intergovernmental strategic framework for investment and delivery in relation to the district and metropolitan spaces," she said.

Twitter
More in this category: « DA set to take legal action if ANC is allowed to register election candidates. National Freedom Party leader Zanele kaMagwaza-Msibi passes on. »
back to top