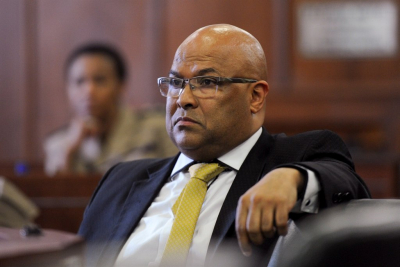 Embattled prisons boss Arthur Fraser signed off on former president Jacob Zuma's medical parole just two weeks before his contract is set to expire, and not be renewed.

News24 has been told by reliable sources that Fraser's contract as Correctional Services National Commissioner is set to expire on 25 September, and his contract would not be renewed.

Sources with inside knowledge of the internal workings of the Department of Correctional Services said that Justice Minister Ronald Lamola had already informed Fraser that there would be no new contract once his current one expired.

Both the DCS and Fraser's employers, the Ministry of Justice and Correctional Services said: "The National Commissioner of Correctional Services, Mr Arthur Fraser, has an active employment contract and we refuse to enter the gossip mill on the likelihood of renewal or extensions of his contract.

"In any event, that is the purview of the appointing authority, which is the president in this case," read the joint response.

Fraser was appointed Director-General of the State Security Agency (SSA) by Zuma in September 2016. Fraser was accused of running a parallel intelligence network which allegedly enabled the former president to build up a private intelligence 'army'.

The move to place Zuma on medical parole comes after he had spent almost a month in hospital.

According to the DCS, Zuma was admitted to an outside hospital on 6 August for medical observation.

Zuma, who was serving a 15-month sentence in Estcourt prison for contempt of court, was sent to an outside hospital for observation on August 6, days before the start of a corruption trial he has thus far evaded.

On 15 August the DCS announced that the jailed former president had undergone unspecified surgery and remained in hospital with more operations planned, prison authorities said.

Meanwhile Cooperative Governance and Traditional Affairs Minister Nkosazana Dlamini-Zuma took to social media platform Twitter saying: "The news of the parole of the former president comes as a welcome relief to many of us.

"We also wish him a very speedy recovery among family and loved ones."

Ramaphosa's allies have also welcomed the move saying it was, "... a much needed extension of an olive branch".

Civil society organisation AfriForum has indicated that it will take the parole up on review.

In a media statement, AfriForum said it viewed, "... the announcement that former president Jacob Zuma was released on medical parole as a violation of justice.

"The civil rights organisation is currently in consultation with its legal team about the possibility to apply for an urgent review application".

With inputs from News24.