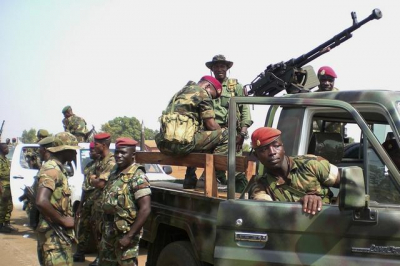 The South African government has noted with great concern the ongoing political and security situation in the Republic of Guinea following an apparent coup de ’tat at the weekend.

In a statement issued by the Department of International Relations and Cooperation (DIRCO), the South African Government called for the "immediate release" of Prof Alpha Condé, the President of Guinea "unharmed and the African Union to actively intervene to ensure a speedy return to stability".

Government further called on the soldiers/military to exercise total restraint and refrain from political interference.

"In addition, South Africa urges all political actors and civil society to engage in meaningful dialogue in order to resolve the current political challenges facing the country," said DIRCO on Monday.

Guinean special forces seized power in a coup, arrested the president, and promised to change the political makeup of the West African country.

The new military leaders announced a nationwide curfew "until further notice", saying it would convene President Alpha Conde’s cabinet ministers and other senior politicians at 11am (11:00 GMT) on Monday.

"Any refusal to attend will be considered a rebellion," the commandos said in a statement.

Uneasy calm returned to the streets of Guinea’s capital Conakry on Monday, as its citizens awaited the announcement of a new government.

Light traffic resumed and some shops reopened around the main administrative district of Kaloum in the capital Conakry, which witnessed heavy gunfire throughout Sunday as the special forces battled soldiers loyal to Conde.

In a video, the putschists showed Conde sitting on a sofa surrounded by troops. The 83-year-old leader refused to answer a question from one soldier about whether he had been mistreated.

The nation of 13 million people – one of the world’s poorest countries despite boasting significant mineral resources – has long been beset by political instability.

One Western diplomat in Conakry, who declined to be named, suggested the unrest may have started after the dismissal of a senior commander in the special forces – provoking some of its highly trained members to rebel.

The chairman of the African Union, DR Congo President Felix Tshisekedi, and the head of its executive body, former Chadian Prime Minister Moussa Faki Mahamat, also decried the move, calling for Conde to be freed.

Twitter
More in this category: « Magwaza-Msibi was concerned with plight of people,particularly youth and women. Livestream:IEC update on the local government elections programme. »
back to top