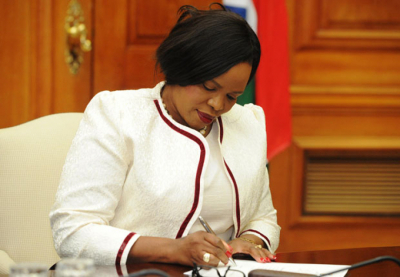 The Founder and President of the National Freedom Party (NFP),Zanele Magwaza-Msibi will be laid to rest on Saturday in Ulundi,Kwazulu-Natal.

KaMagwaza-Msibi, passed away on Monday morning.

NFP secretary-general Canaan Mdletshe confirmed her death, saying the party was devastated as NFP members had hoped that she would recover.

Mdletshe said she had died as a result of cardiac arrest.

President Cyril Ramaphosa has expressed his condolences to the family and friends of former Science and Technology Deputy Minister Zanele kaMagwaza-Msibi.

Ramaphosa expressed sympathies to the National Freedom Party where she served as the party's leader.

The President was saddened by kaMagwaza-Msibi’s passing.

"It is sad to learn that Zanele kaMagwaza-Msibi has joined a succession of prominent South Africans who have passed on after making numerous extraordinary contributions to our democracy and society. Ms Zanele kaMagwaza-Msibi was a leader who devoted herself to the betterment of the lives of young people and of women and set a strong example for how this could be achieved,"he said.

The President hailed the leadership she showed in the various positions she held.

"She held leadership positions in civil society, local government, national government and Parliament, where she conducted herself with the best interests of communities and the country at heart.

"She also enriched our parliamentary democracy with her intellect, integrity and dignity, and showed that political opposition can be fearless and firm without being antagonistic. May her soul rest in peace," said the President.

Paying tribute to the late kaMagwaza-Msibi, Nzimande said she will, inter alia, be remembered for her leadership in various strategic initiatives in the science and technology sector and in Parliament.

"Despite experiencing serious health problems in 2014, kaMagwaza-Msibi continued in the portfolio and, against great odds, managed to complete her term in office. She brought energy and enthusiasm to her portfolio, and led a number of flagship initiatives during her time at the department, including working on the Southern African Young Scientists Summer Programme and the Hydrogen South Africa (HySA) programme," Nzimande said.

Nzimande added that kaMagwaza-Msibi strongly believed in the need to educate and train young scientists, particularly women, to drive the knowledge-based socioeconomic development and to address global challenges.

She charted the way for rural women and girls

Premier Zikalala has on behalf of the Provincial Government expressed deep sadness at the news of the passing of Zikalala.

Zikalala said kaMagwaza-Msibi will be remembered as one of the hardworking councillors, senior party leader and Member of Parliament for the NFP.

"In those roles kaMagwaza-Msibi charted the way for women and girls from the townships and rural areas of our country who, through her exemplary leadership, realised that they too could succeed in the world of politics.

"We have worked with kaMagwaza-Msibi since the 2011 Local Government Elections and enjoyed great respect for one another, through ensuring that our cooperation is anchored on the development of the people of KwaZulu-Natal," Zikalala said.

"To her entire family, may God envelope you in his protective spirit and give you strength in this painful time," the Premier said.

Zikalala will today lead a government delegation to the family of kaMagwaza-Msibi in Ulundi to pay their respects.

Twitter
More in this category: « Confusion over drivers licence fees proposal in South Africa. Eskom launches programme to boost use of green power. »
back to top