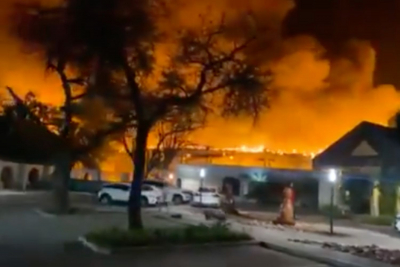 The cause of the fire is under investigation, and so far, no injuries have been reported. Photo: Twitter.

North West firefighters are battling a blaze at Mmabatho Palms Hotel in Mahikeng.

Details are still sketchy but police have confirmed that the blaze broke out at the Mmabatho Palms Hotel in the early hours of Wednesday morning.

Provincial police spokesperson Sabata Mokgwebone says, "We can confirm that our members together with firefighters are at Mmabatho Palms Hotel that caught fire earlier this morning. At this stage, the cause of the fire and other details are still unknown."

Some people are still trapped in their rooms but no fatalities have been reported.

The extend of the damage to the hotel has not yet been established but it is reported that some guests are being sent to a nearby hotel.

The resort is a four-star-rated destination, and is situated adjacent to the Leopard Park golf course.

Mmabatho Palms is one of the oldest casino resorts in South Africa, built over 40 years ago.

This is a developing story. Updates to follow as more information is made available.

Twitter
More in this category: « Zuma meeting lawyers to discuss 'a range of issues' - JG Zuma Foundation. SIU and Transnet get preservation order freezing R4.2bn in bank accounts. »
back to top