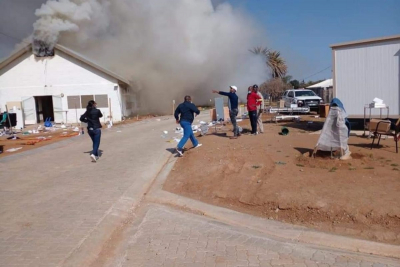 The North West Department of Health confirmed a fire had broken out at Christiana Hospital,three hours away from Mmabatho Springs.

Health MEC for the province, Madoda Sambatha, said in a statement the entire hospital was affected by the blaze, and that all patients had to be evacuated.

There've been no reports of deaths or injury so far.

This development comes on the back of Wednesday morning's blaze at Mmabatho Palms in Mahikeng.

It’s not yet clear what caused that fire and the authorities are still waiting for the building to cool down before they can comb the area for evidence.

A video taken at the scene indicated that construction work might have been happening at the hospital at the time the fire occurred.

"There is some construction happening at the hospital and speculation is that the fire started from the side of the construction."

Meanwhile, firefighters battled a blaze at Mmabatho Palms Hotel, also in the North West, which erupted on Wednesday morning. The police are still investigating the cause of that fire.