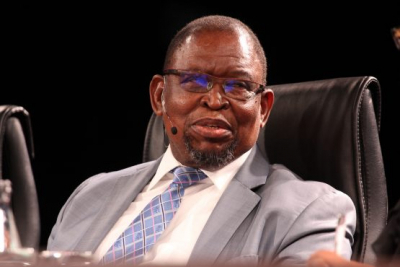 The National Treasury is working with the Presidency and the Department of Social Development to tackle the poverty gap, and this will include looking at an alternative for the R350 SRD grant, says Finance Minister Enoch Godongwana.

Godongwana said this when Ministers in the Economics Cluster responded to questions in the National Assembly on Wednesday.

"The National Treasury is working with the Presidency and the Department of Social Development and other partners to consider various options for reducing the national poverty gap.

"This includes considering of what might replace the R350 Social Relief of Distress (SRD) grant. However, all options also need to be considered with respect to their availability as well as their fiscal and revenue implications before a final decision can be made," he said.

He said that in terms of achieving sustainable relief for vulnerable households, the baseline budget for a social assistance grant is about R205 billion for 2022 to 2023.

"The social wage comprising of a range of government interventions including social services, free basic service and others is around 60% of non-interest spending. This is about R1.5 trillion per annum."

"What we are going to require to structure and change and make sure this economy can recover is mobilize all of South Africans to work together to ensure that this economy is brought into a better performance.

"To unlock the growth potential of the economy, our focus will be as National Treasury, accelerating the implementation of the Economic Reconstruction and Recovery Plan because we are working on the basis that government as a collective has agreed on a plan.

"Focus on growth and job-creating structural reforms; maintaining fiscal sustainability, which in our view, includes effectiveness and efficiency of spending with a greater emphasis on capital expenditure than on consumption expenditure, I think we will be dealing with this matter in detail in the MTBPS," he said.

Godongwana also said government would also focus on strengthening the capacity of the state.

"Recent announcements, which demonstrate government’s commitment to accelerate the implementation of structural reform to support growth include among others, moving with speed to deal with bottlenecks blocking the release of spectrum," he said.

Twitter
More in this category: « Office of the Chief Justice debunks 'handwriting directive'. RTMC clarifies misleading reports on the R250 debacle. »
back to top