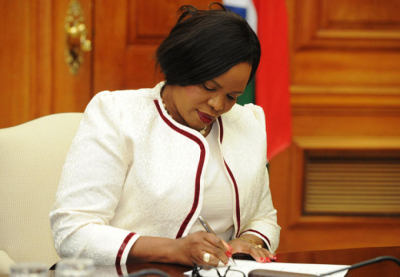 By Lehlohonolo Lehana,Live from Ulundi.

A former IFP national chairperson, Magwaza-Msibi left the party in 2011 to form a splinter organisation, the NFP. After serving as Zululand District Municipality Mayor for 15 years, in 2014 she was appointed deputy minister of science and technology.

Her popularity within the ranks of the IFP ruffled many feathers, particularly among chauvinistic traditionalists who did not take kindly to the emergence of her support groups, popularly known as "Friends of VZ".

She had to appear before the national council to account for the activities of her supporters. By the time she had had enough, a sizeable chunk of IFP supporters was ready to follow her as she walked out of the IFP.

History will record that kaMagwaza-Msibi and her NFP shook Inkatha’s foundations in a manner much more spectacular than numerous other tame initiatives.

Some, such as the Inala Party, had had the backing of the late King Goodwill Zwelithini and were machinations of the apartheid government.

After 1994, former IFP national chairman Dr Ziba Jiyane broke away to form the National Democratic Convention, which managed to secure a short-term presence in the provincial legislature before collapsing when floor-crossing was allowed.

But kaMagwaza-Msibi was the real deal, and this has been acknowledged even by her bitter rivals.

For her supporters, her death, on the eve of a redemptive 2021 local government election, is yet another tragedy of unimaginable proportions when there is a yearning for fresh voices to bolster the project of democracy in toxic KwaZulu-Natal politics.

Meanwhile Magwaza-Msibi was described as an exemplary leader by KwaZulu-Natal Premier Sihle Zikalala.

Zikalala was paying tribute to her at the funeral in Ulundi.

He said Magwaza-Msibi's death would affect the country’s political sphere and development agenda.

"While this is a sad moment, we must be comforted and remember Magwaza-Msibi as one the hard-working councillors."

Zikalala described her as an exemplary leader, an activist and life-long champion who was determined to change the lives of people, especially those in rural areas.

"Through her, we learned that women's voices must be heard and respected. We will remember her as an active councillor. She always availed herself and was always passionate about the needs of the people she served. She spent 15 years working for the people of Zululand."

He also encouraged mourners to go out and vote in the upcoming elections in honour of Magwaza-Msibi.

Twitter
More in this category: « KaMagwaza-Msibi to receive Special Official Provincial Funeral Category Two. Fire at Kendal Power Station damages one unit,two others shut down. »
back to top