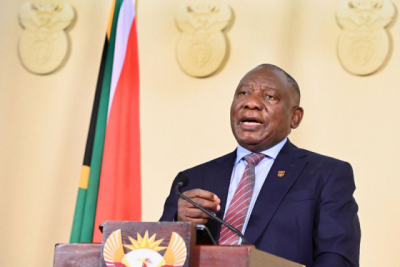 Restrictions on movements of people and gatherings have been eased in South Africa following a steady decline in new COVID-19 infections.

This was announced by President Cyril Ramaphosa during an address to the nation on Sunday evening.

The President said the decrease in the number of new infections across the country spurred the decision to move the country to a lower level of restrictions.

"While the third wave is not yet over, we have seen a sustained decline in infections across the country over the last few weeks. The average number of daily new infections over the last week is 29% lower than the preceding seven days, and 48% lower than the seven days before that. While the third wave peaked in Gauteng far earlier and declined far faster than in other provinces, there is now a marked decline across all provinces," he said.

Ramaphosa said that after thorough consultations, cabinet had decided on the following measures for adjusted alert level 2:

The President said the measures are expected to be reviewed in two weeks and warned that infections in the Free State and Northern Cape remain a concern.

"The two provinces that stand out from the others are the Northern Cape and Free State, where the number of infections as a proportion of the population has remained relatively high for several months. We are therefore focusing our efforts on these provinces to understand what is driving these infections and what measures we need to take to bring them down," Ramaphosa said.

The President further commended the efforts of people living in South Africa who adhered to protective measures. He also thanked industries such as arts, tourism and churches for their contribution.

"We are able to ease these restrictions thanks to the efforts of all South Africans to adhere to the regulations and basic health measures. We are particularly thankful to those sectors of society that have had to endure restrictions on their activities for some time."

On the vaccine front, Ramaphosa announced that the country has secured enough COVID-19 vaccines to cover the entire adult population of South Africa.

Ramaphosa said although securing the vaccine doses is an important step; citizens still need to come forward to get the jab.

To date, at least 14.6 million vaccine doses have been administered with healthcare workers vaccinating one million South Africans every four to five days.

"We are increasing the pace of vaccination and ensuring that we reach those that are most vulnerable to serious illness. While everyone aged 18 years and older is eligible to be vaccinated, we are concentrating our efforts and resources on those over 60 years of age and those with co-morbidities. To date, over 57% of persons over 60 years of age have been vaccinated. This is a great achievement, but we need to reach them all," he said.

He said vaccines remain the strongest source of protection against severe illness and encouraged all unvaccinated people in South Africa to get the jab at one of the thousands of vaccination sites in the country.

"There is now overwhelming evidence from hundreds of countries that vaccines are safe and provide strong protection. We have taken steps to make it easier for people to access vaccination wherever they are. We now have more than 3000 public and private vaccination sites across the country, and most private sites will vaccinate any member of the public for free whether you have health insurance or not.

"It is important to bear in mind that this is a new virus that the world has never encountered before. If many people are not vaccinated and remain vulnerable to infection, the chance of new and more dangerous variants emerging is far greater. That is why vaccines are currently the most potent weapon we have to fight this pandemic,"he said.

Local government elections and the pandemic

With the country set to elect new leadership for more than 250 municipalities on 1 November 2021,Ramaphosa said discussions with political parties were held to reiterate the importance of COVID-19 health protocols and adherence to the National State of Disaster regulations.

"It is vital that as we undertake this great democratic exercise, we do everything within our means to prevent a resurgence of COVID-19 infections. At the same time, we need to ensure that the pandemic does not limit the ability of all South Africans to freely exercise their democratic right to elect their local councillors.

"This is a matter that I discussed with political party leaders earlier in the week, and there is a firm commitment from all parties that election campaigning should adhere to the state of disaster regulations and all health protocols," said the President.

In his address, the President also expressed concern at recent gender-based violence (GBV) incidents reported in the media.

"We have just finished Women’s Month, where we planned to celebrate the success of women in many fields. Instead, our country bore witness to several brutal attacks by men against women. This month alone there have been a number of terrible crimes committed against women and girls," he said.

The President referred to the case of Fort Hare law student Nosicelo Mtebeni, who was murdered and dismembered in East London in the Eastern Cape. There was also an incident of a Grade 1 pupil from Khensani Primary School in Soshanguve, who was raped in the school's toilets. The President also spoke of Palesa Maruping, who was found hanging from the ceiling of a house in Khuma Location in the North West as well as Pheliswa Sawutana, who was strangled to death in Kosovo informal settlement in Cape Town.

Twitter
More in this category: « South Africa moves to adjusted alert level 2 lockdown on Monday. Magashule’s leave to appeal his ANC suspension dismissed. »
back to top