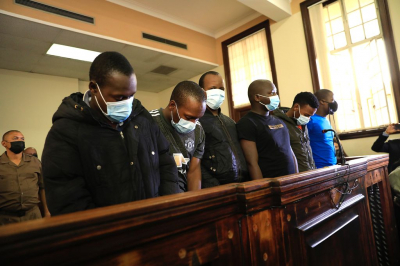 The case of six men arrested in connection with the murder of senior Gauteng Health Department official, Babita Deokaran has been postponed to next month for consultation.

The accused, Phakamani Hadebe, Zita Hadebe, Nhlangano Ndlovu, Sanele Mbele, Siphiwe Mazibuko and Phakanyiswa Dladla, were due to apply for bail but their legal counsel, Shafique Sarlie, asked for a postponement.

In his application, Sarlie told the court he had been unable to properly consult his clients due to Covid-19 restrictions at Johannesburg Prison.

Sarlie said lawyers were allowed to consult with their clients only on a Friday between 10am until 2pm.

"These circumstances are worsened by the fact that, during consultation, I am separated from my clients through a bulletproof glass. That has also made it difficult for our interpreters. I was also unable to obtain proper instruction from the clients," Sarlie said.

Adding to his difficulties, Sarlie said the prosecution provided him with an affidavit, opposing the bail application, saying it supported his application for the court to allow him more time to consult with the accused.

"I need to deal comprehensively with all the material issued raised in the investigating officer’s affidavit, "Sarlie said

He asked the court to grant him an opportunity to fully consult with the accused, and asked that the matter be postponed until October 1.

Sarlie said the bail application would be in the form of submission of written affidavits to the court.

The court granted the postponement.

Inside court to witness the appearance, was the ActionSA president Herman Mashaba and his party’s mayoral candidates for Tshwane and eThekwini Abel Tau and Dr Makhosini Khoza.

There was also a group of ActionSA supporters outside court who came carrying placards which read: "Protect our whistleblowers" and "Jail the criminal masterminds".

Deokaran was shot and killed outside her Winchester Hills in what is believed to have been an orchestrated hit.

She had just dropped off her child at school and was returning home with a female friend when she was shot and killed.

The accused were remanded in custody. They also face charges of attempted murder and illegal possession of firearms and ammunition.

Twitter
More in this category: « SA receives $2 billion financial aid from New Development Bank to fight against COVID-19. Zikalala orders police to hunt down killers of three Inanda women. »
back to top