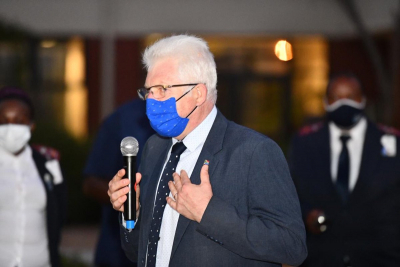 Western Cape premier Alan Winde has welcomed the government’s move to an adjusted alert level 2 lockdown but raised concerns about the country’s current regulations and what seems to be a never-ending national state of disaster.

On Sunday (12 September), Cooperative Governance and Traditional Affairs (Cogta) minister Nkosazana Dlamini-Zuma gazetted an extension of the national state of disaster, which will see it continue until 15 October 2021.

The government declared a national state of disaster under Section 27(1) and Section 27(2) of the Disaster Management Act on 15 March 2020 in response to the coronavirus pandemic.

While the national state of disaster was originally set to lapse on 15 June 2020, the act provides that it can be extended by the Cooperative Governance and Traditional Affairs minister by notice in the gazette for one month at a time before it lapses.

However, it has also faced criticism for giving national government wide-ranging powers over the lives of citizens, with almost no limits and little to no oversight from parliament.

"I am concerned that president Cyril Ramaphosa did not present a concrete plan on when he will end the national state of disaster. Instead, the disaster was extended for another month by the minister of Cooperative Governance and Traditional Affairs," said Winde.

"The hard truth is that we cannot be in this state of disaster forever, and we need to have a frank discussion on how we will continue to manage Covid-19 in the future without relying on this extreme instrument."

The Western Cape premier said that the government must introduce a new, differentiated management system that considers each province’s coping capacity.

"We have learnt how to manage waves effectively in the province, and we continue to have the capacity to do so at the provincial level. I will be engaging with the president on this important matter during the national lekgotla this week, where all nine premiers will be present."

Twitter
More in this category: « Zikalala orders police to hunt down killers of three Inanda women. SARS Customs has seized a drug-making substance worth R40 million. »
back to top