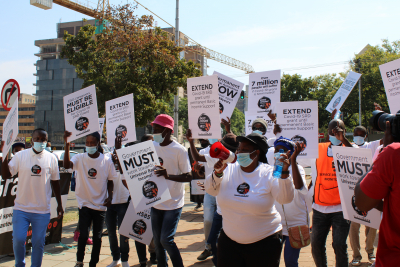 File Photo:Activists picket outside the National Department of Social Development (DSD) offices in Pretoria , calling for the extension and increase of the Covid-19 Social Relief of Distress Grant. Photo Credit: Masego Mafata.

Government met Tuesday to discuss how to accelerate the country’s economic recovery and consider the most feasible way to provide further welfare grants.

The ruling African National Congress (ANC) has agreed in principle on the need for a basic income grant and the government is now considering the most sustainable way to implement it, Minister in the Presidency Mondli Gungubele said.

In addition to a range of social grants the government already offers, it introduced a special grant in July to mitigate against the effects of Covid-19 for those not currently receiving other payments.

"The fact that the finance minister said there are fiscal pressures, does not change the fact that we need to find innovative ways on how to make sure that we deal with the desperations of people," Gungubele said.

The cabinet will discuss whether or not the grant would be given to households or to individuals, he said.

Godongwana will present a fiscal outlook to the gathering, and advise on expenditure pressures and whether there is a need to make any adjustments.

Meanwhile the Financial and Fiscal Commission (FFC) said that the Covid-19 pandemic and introduction of the R350 Social Relief of Distress Grant have provided some impetus for discussing a basic income grant in South Africa.

The FFC is an independent constitutional advisory institution. Its role is to advise and make recommendations to Parliament, provincial legislatures, organised local government, and other state organs on financial and fiscal matters.

While the debate around a universal income is still ongoing, the group said that Godongwana would need to consider such a grant’s fiscal impact.

In a presentation to parliament this week, the FFC said that the costs associated with a standard basic income grant are large. A true universal income set at R350 per month would cost approximately R243 billion per year, based on the 2020 mid-year population estimates.

However, a more streamlined grant of R350 per month to target the unemployed – using the expanded definition – between the ages of 18 and 59 years would cost R44.8 billion per annum or 0.9% of GDP, it said.