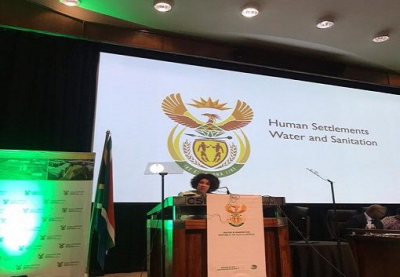 Water and Sanitation Minister Senzo Mchunu has called for a lasting solution to the water crisis challenges plaguing the Maluti-a-Phofung Local Municipality (MAP) in the Free State.

The Minister made the call during a briefing on the water situation in the Municipality (MAP) on Monday.

During the visit, the Minister also reiterated the need for all taps in South Africa to have water.

"Every tap in South Africa should be having water not just in certain towns and areas," said Mchunu. He was accompanied by Water and Sanitation Deputy Minister David Mahlobo and Free State Cooperative Governance and Traditional Affairs MEC Mxolisi Dukwana.

Vandalism, theft, and ageing infrastructure were also top of the list.

MAP Local Municipality Municipal Manager Futhuli Mothamaha during the briefing said that the municipality had begun a programme of installing pre-paid meters in order to address the issue of non-collection of revenue.

He indicated that the municipality would build capacity for maintenance as it appeared that there was a delay between damage to infrastructure and repair.

"The Minister was clear that sewage spillages are priorities and should be treated as such. A meeting should take place between DWS in the Free State as well as the municipality and Maluti-a-Phofung Water no later than 2pm on 5 October 2021," said the department.

MEC Dukwana observed that there has been a rise in vandalism and theft of water and sanitation infrastructure especially leading up to the local government elections.