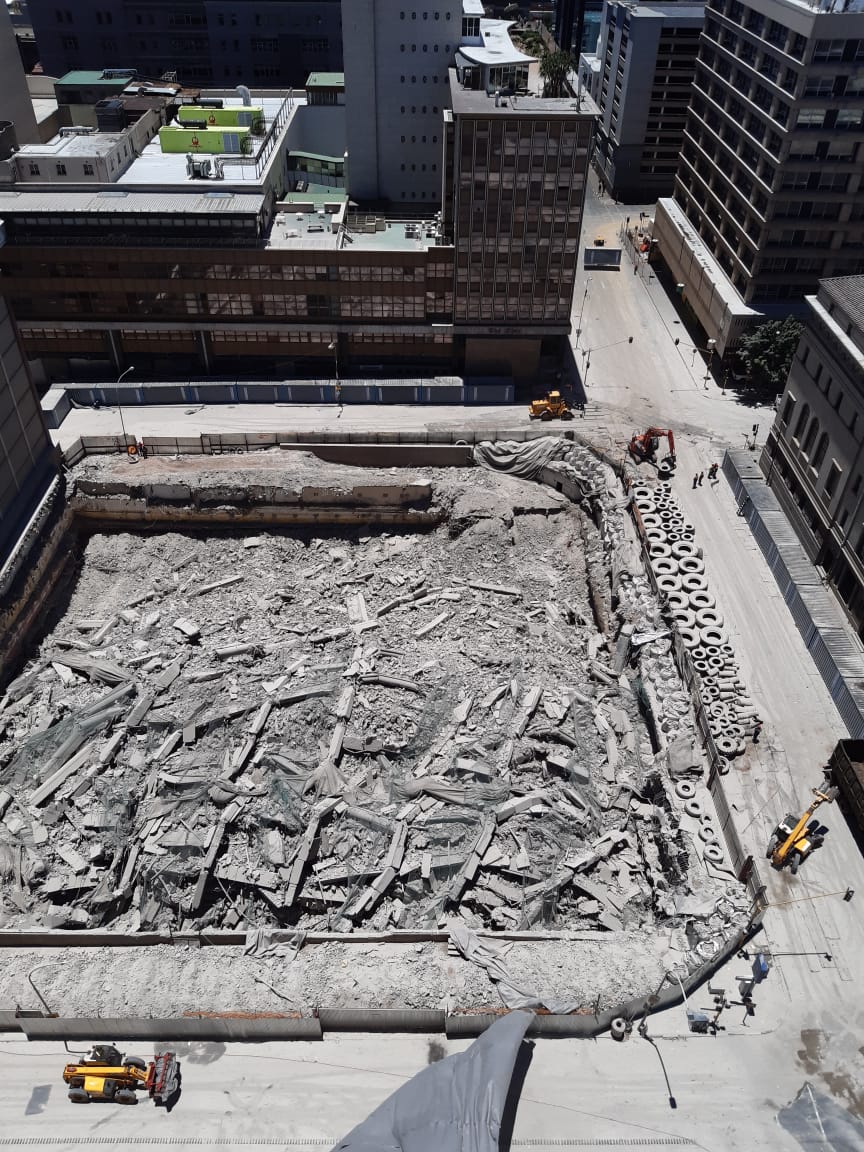 Jet Demolition Director Joe Brinkmann highlights the close working relationship that the demolition specialist established with various stakeholders throughout the course of the project. The co-operation and dedication to the project by all stakeholders, including its main client the Gauteng Department of Infrastructure Development (GDID), various local and provincial departments, project managers, subcontractors, specialists, and the local public, all contributed to the successful implosion of the fire-damaged structure.

Safe-making, monitoring, and cleaning of the structure had already commenced in December 2018. The final four months preceding the implosion included valued contributions and detailed planning by emergency services, local traffic, and law enforcement, all to ensure the safety of the general public during the implosion. 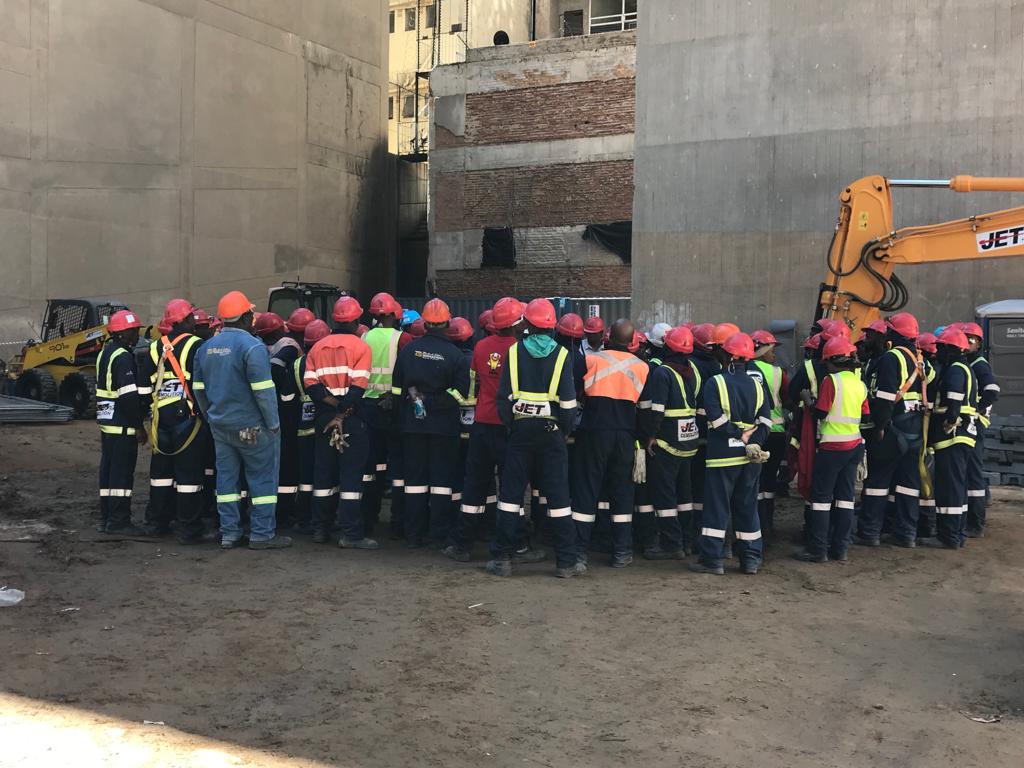 Brinkmann also pays tribute to the surrounding residents and businesses – including student accommodation, and landmarks such as The Starnewspaper head office and Luthuli House – for being fully cooperative and supportive of the project from the outset.

“During the entire project, we were also highly conscious and respectful of the fact that three firefighters lost their lives when a fire broke out in the building in September 2018,” Jet Demolition Director Liz Brinkmann adds.

Jet Demolition was awarded the contract after a competitive tender process, and presented the GDID with two options: Controlled implosion of the entire structure, or a top-down mechanical demolition process. Given the sensitivities surrounding the site itself, and concerns about the extent of damage to the structure, GDID elected the implosion approach.

The first step was to re-support the fire-damaged steel-reinforced concrete building by installing engineered propping where required. An advance-warning monitoring system was also installed to warn of any creepage that could indicate an imminent collapse. Thereafter all the furniture, contents, and fixings for the three government departments that had occupied the building, as well as the personal property of the employees, had to be removed for off-site storage, for which a man-and-materials hoist was installed.

Jet Demolition carried out a geotechnical investigation, design, and installation of lateral support to the basement retaining walls to ensure their stability during, and after, the demolition of the building. This was an important consideration for the future redevelopment of the site, especially given the premium placed on underground parking in the city centre.

The fact that there were no structural drawings available for the building meant that Jet Demolition had to physically determine the make-up of the structure, in addition to determining the exact location of services such as electricity, water, and fibre-optic cabling. It was important to protect these services adequately during the implosion event, to avoid any disruption to the rest of the city. All of the major utility companies were on standby to assist with any contingencies.

A major challenge was posed by the fact that the main building columns tapered quite dramatically from the bottom to the top, which required a detailed assessment of the column size and rebar strength at all points. The columns were at their widest in the basement, where they measured 1.5 m by 1.8 m. Not only did breaking up these massive columns pose a major challenge, but all of the debris had to be contained to prevent damage or injury.

The closest building was only 7.8 m away. “The height relative to the closest structure, and the very tight constraints of the surroundings, was what made it a very challenging project to get done in the correct manner, without damaging any of the other structures,” Brinkmann explains.

In order to ensure a precise implosion, the Jet Demolition team ended up blasting various structural elements on 14 floors in order to guarantee a high level of the explosive-induced collapse process. It was necessary that the rubble fold into the tightest, most compact form on the way down as it was deposited into the basement, where impact cushions were installed to minimise ground vibration.

A state-of-the-art electronic blast initiation system from Bulk Mining Explosives (BME) was installed so that each of the 2 363 separate charges could be individually timed and perfectly sequenced in accordance with the implosion design. “An important part of our blast design was to spread the detonations as far as possible within the timespan required to set off all the charges.”

Brinkmann adds that South Africa has been a pioneer in the development of electronic initiation, with Jet Demolition itself using this technology for the past couple of decades on demanding implosion and blasting projects. The system was therefore ideal for this complex and risky project, ensuring that all of the detonators were functional, and that the timing was spot-on. “The major advantage of this system is its precision, timing flexibility, and complete control, without the restrictions imposed with using a shock-tube system, for example.” 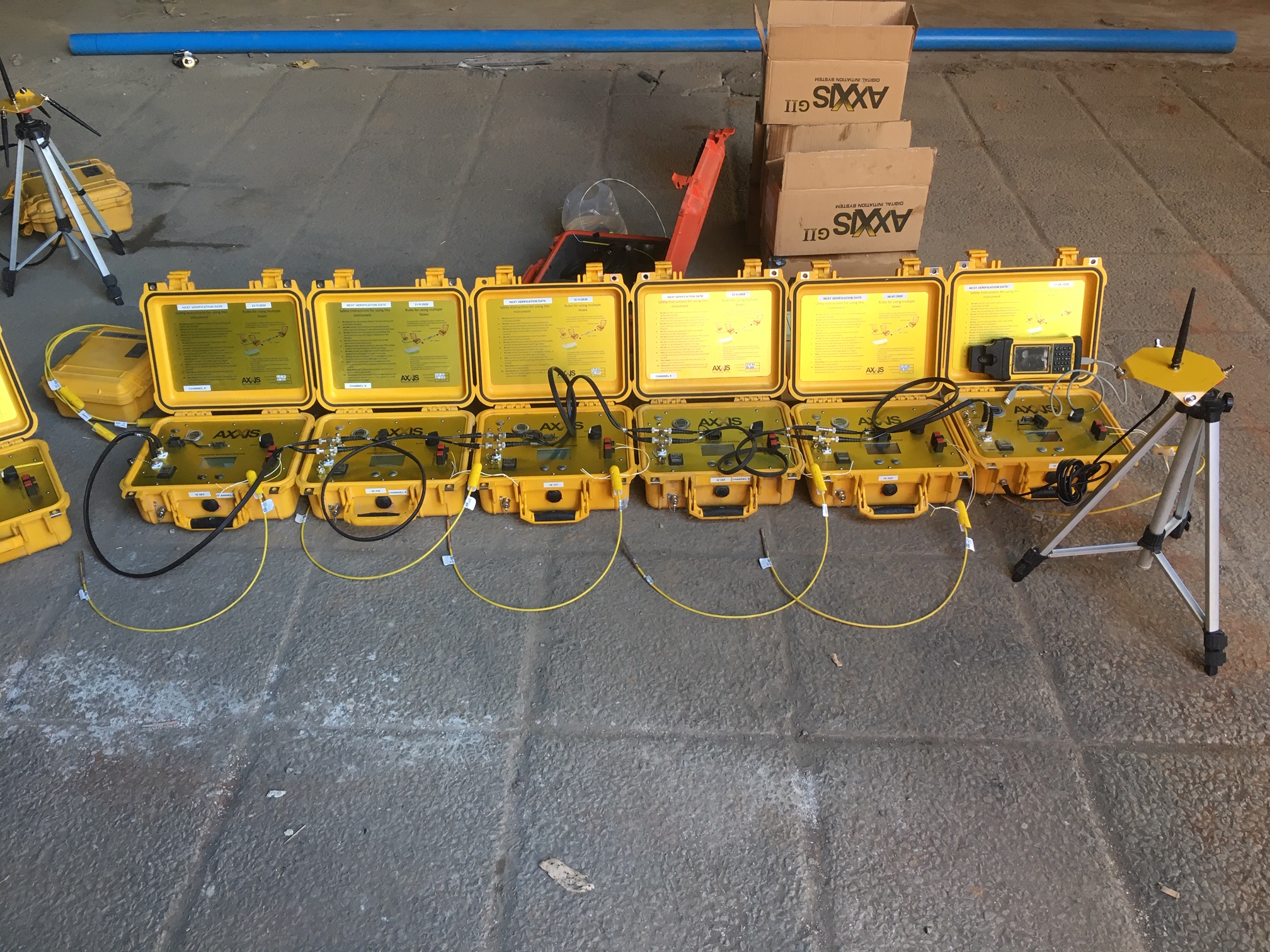 The main consideration was to minimise the air blast and any explosively-driven debris escaping the structure during implosion. It was planned to rupture the blasted columns in a predetermined sequence, where after the building would undergo progressive collapse and break-up under gravity. The charges used thus had to be contained within the concrete itself to assist in reducing the air blast, with surface-fixed charges being unsuitable.

To achieve this, holes had to be precisely and carefully diamond-drilled into each of the columns and walls in exact locations as per the blast design plan, with each and every hole checked for quality-control purposes. A total of 914 kg of conventional mining and civil engineering explosive was used in the implosion.

The charging process itself took nine days to complete, beginning the week before. During this period, Gauteng experienced several severe thunderstorms. Fortunately, the electronic blast initiation system included built-in fuses in the charges that are activated in the event of any lightning strike, where after these have to be replaced.

The evening of Saturday 23 November saw another severe storm, which had the overnight crew working well into Sunday morning to replace the implosion protection curtains on the surrounding buildings that had been affected by the intense wind. These curtains were hung 25 m high to protect the building façades from any flying debris. A total of over 60 000 m2 of geotextile fabric, as well as 1 600 rolls of diamond-mesh fencing, was used for containment.

An entire city block around the implosion site was closed-off to traffic from midday on Saturday, and residents and tenants evacuated for safety reasons. Protection measures were also placed on the surrounding roads, including conveyor belting and large tyres in the event of any rubble overshooting the site boundary. “We have systematically been working on these blast-protection measures for the past four months,” Brinkmann reveals.

The implosion took place at about 09:03. From the time that the first charge went off, to everything being down on the deck, was a mere eight seconds. In terms of his assessment of the outcome, Brinkmann highlights: “It really did exceed our expectations. We were concerned that we would get some rubble in the streets, but this did not happen, as the control was that good. 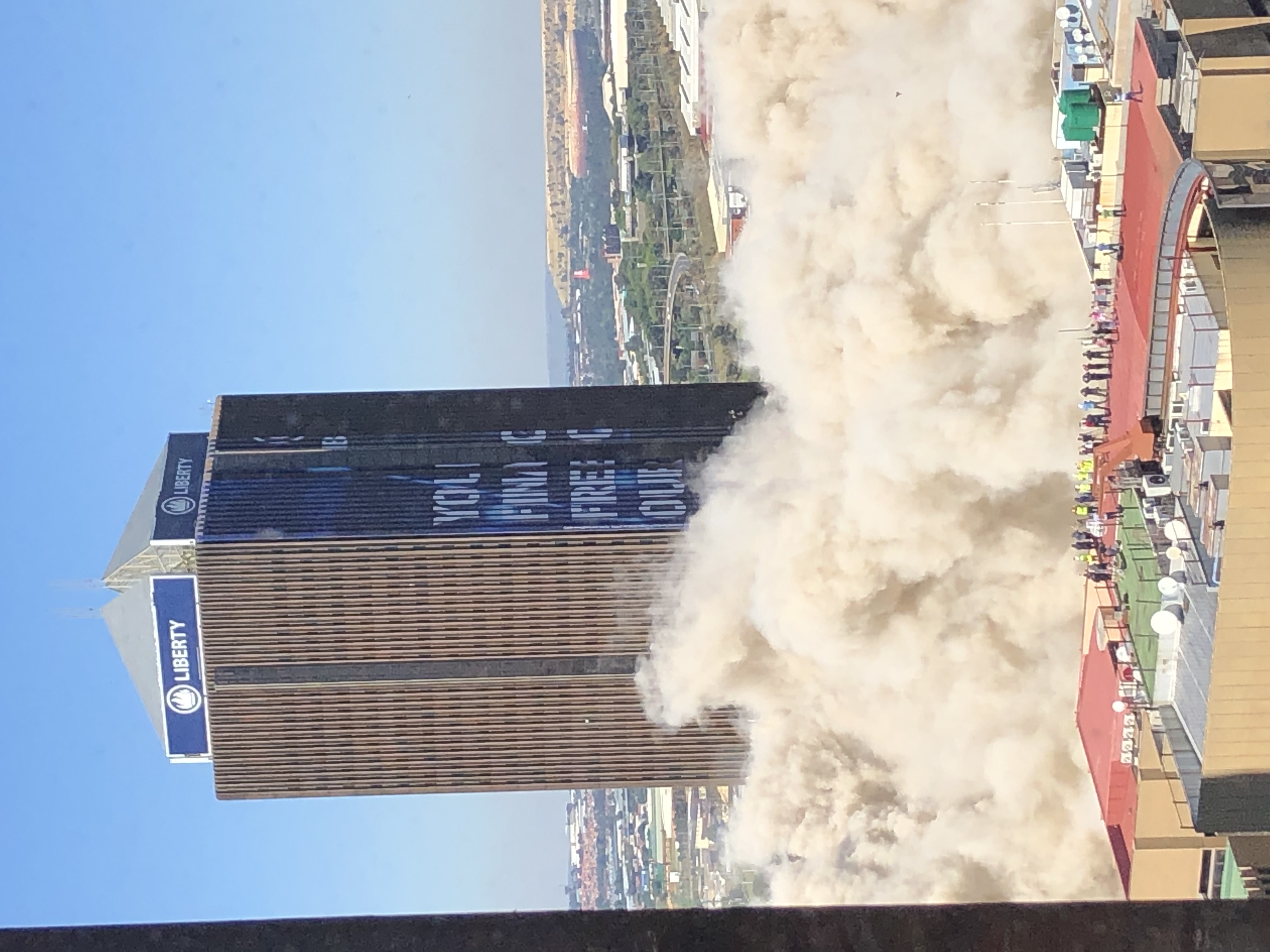 “When the building collapsed, it literally chewed itself up, and produced the smallest possible debris pile as it fell into the basement. We were thrilled at how minimal the impact of the implosion was at the end of the day.”

Now that the building itself has been imploded, Jet Demolition will oversee an intensive three-month period during which all of the rubble will be broken down further, and the rebar separated from the concrete for a planned +98%  recycling rate, excluding the burnt-out material, which was disposed of safely. The post-implosion team will include local black-owned contractors and Expanded Public Works Programme (EPWP) personnel, who will assist with operational, planning, logistics, and traffic control during this period.

As for the Jet Demolition team itself, it is already hard at work prepping a major contract to demolish three high-rise buildings in India, as part of its diversification drive into markets outside South Africa. Brinkmann ascribes the success of the Bank of Lisbon implosion solely to the expertise and experience of the Jet Demolition team. “We have a fantastic team. This truly shows what can be done. I am so proud of how everyone just climbed in and really pushed the project from the get-go.”

Tweet
More in this category: « Water master plan has been launched to help avoid 17% water deficit by 2030. President Cyril Ramaphosa has withdrawn from The Chairman’s Conversation hosted by Given Mkhari. »
back to top