Numsa go ahead with strike after talks collapse. 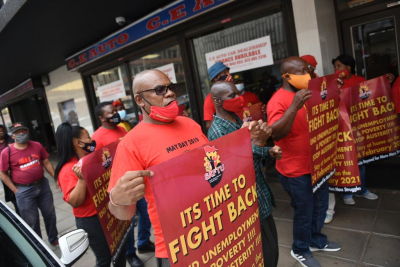 Members of the National Union of Metalworkers of South Africa (Numsa) embarked on a national strike on Tuesday (5 October) following a deadlock in negotiations for a new wage deal.

Union members didn’t report for duty in five of the country’s nine provinces and will begin picketing and marching during the course of the morning, Numsa spokeswoman Phakamile Hlubi-Majola said.

The union has about 155,000 members, while the strike is expected to attract more than 300,000 workers, including from allied unions, she added.

"The strike is on, and nothing has changed," Hlubi-Majola said. "As of this morning, workers didn’t go to work, so we are on strike."

Numsa, one of the most prominent labour organisations in South Africa, is demanding an 8% wage increase in the first year and a 2%-above-inflation increase in the subsequent two years.

The union said it has planned marches for the Eastern Cape, Northern Cape, and KwaZulu-Natal, with rallies also expected to be held in the Western Cape.

Bosses in the engineering sector benefitted from the sacrifice which workers made last year when a standstill agreement was signed, and no increases were given in order to cushion the industry against the ravages of the Covid-19  virus. Now they are refusing to give back," the union said in a statement on social media on Monday (4 October).

"We are demanding that 8% increase across the board for the first year, and CPI + 2% improvement factor for the second and third year. If CPI + 2% falls below 6%, employers must offer 6% or re-open negotiations."

"We are calling on all workers to come out and to join the strike in defence of their just demands for a meaningful increase! We are calling for a total shutdown of the engineering sector until these stubborn employers see sense."

However, while the union is resolute about getting the wage battle to swing in its favour, employer associations say they have mechanisms in place prepared to soften the blow of what they expect to be a bruising strike.

More in this category: « Suspended Eskom senior manager ordered to pay back the money. Babita Deokaran murder trial postponed to November. »
back to top